Some say scrapbooking is a talent.

I also like to act.  I was on the drama team in high school, I majored in Theater in college and I’ve done community theater.  That’s a talent, right?  ;)

I really enjoy acting.  I wish I could do it more!  I’ve only done one play since my son was born and I’m almost died from sleep deprivation between being up all night with the baby and having late rehearsals.  Maybe when he gets a little bigger, I can do it again.

I don’t have very many pictures on my computer related to acting and I don’t feel like digging those pictures out.  But I do have two that might interest you. 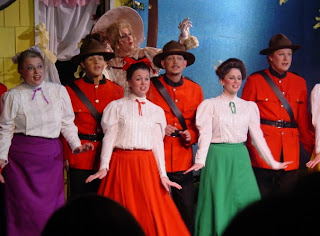 This picture is from the only musical I’ve ever done.  I’m still not sure how I got roped into doing a musical but this was a big deal to me.  It was my first show outside of school.  I got the role on my own merit from going to an audition and it was at a very popular theater in downtown Birmingham.  It was a lot of fun!

Birmingham is also quite a hot spot for independent filmmakers.  I’ve had a chance to have bit parts in 2 independent films and one Japanese TV show that filmed an episode here (I know, weird!).  One of the independent films, Johnny Flynton, was shown at the Sidewalk Film Festival here in Birmingham.  We went to the showing and ran into the director and main character who recognized us!  (I say us, because I drug hubs – who was just the boyfriend at that time, we were 18 – with me to this one).  The main character – maybe you recognize him – said, “Hey, I remember you guys!  The cute couple!”.  Anyway – here’s a picture we took at the film festival: 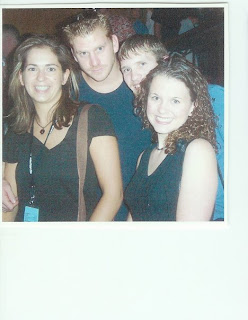 Oh, and did I mention the film was nominated for an Oscar?

It’s a 38 minute film and you can view the whole thing on Internet Movie Database.  You can see me and hubs at 25:58 into the video.   (FYI: screen it before you watch it around the kids.  It gets racy at 15 minutes in)

And over the last 3 years, I had the opportunity to work with some very talented local ladies in two productions of Steel Magnolias and one show called First Baptist of Ivy Gap.  I’ve made some wonderful friends because of those shows.  So I’m thankful for my talent that allows me to meet amazing and wonderful people!