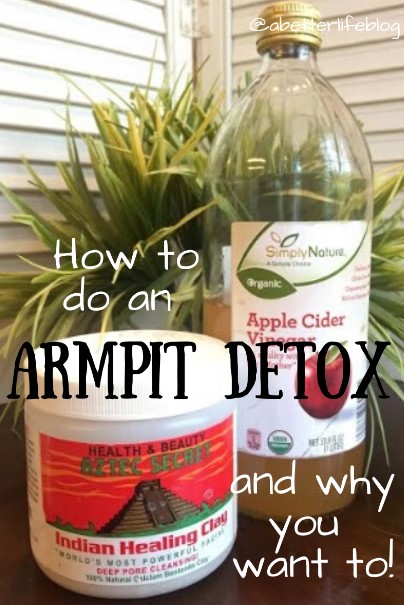 I starting using deodorant with aluminum in it when I was just a teenager.  So I was at a point where well over half my life I had been rubbing aluminum on my armpits every day – at least twice a day..

So I started thinking that I needed to switch to a natural, aluminum-free deodorant.  So I did.  I put it on one night after my shower thinking this would solve everything.

It turns out, I skipped an important step.

You see, those years and years of using aluminum deodorant had clogged up the pores in my armpit.  That’s why I always smelled like my deodorant and had a whitish film on my armpits even after a shower.  My deodorant was literally IN my pores and no amount of scrubbing was going to get it out!  And it was blocking the natural deodorant from being able to work.

What I needed was an Armpit Detox!

I know, it probably sounds crazy.  But it works!  The recipe is the same as my Two Ingredient Facial Mask!  So when you do your Armpit Detox you can mix up enough treat yourself to a facial too!

That’s it!   In a small bowl, I mix 2 TBSP Indian Healing Clay with 1 TBSP Apple Cider Vinegar.  Stir it up.  If it’s too lumpy add more ACV a little at a time.  If it gets too runny, add a couple more pinches of clay.  You’re wanting a smooth but thick consistency.

Apply generously to your armpits and let it dry.  (It’s best to wear a tank top while doing this.  I’ve never had it stain anything but don’t wear something you love because I don’t know what it will or won’t damage.)

Once it’s dry (you’ll know it’s dry because it’ll be tight, hard and cracking) jump in the shower and wash it off!

How does it work?

The mask recipe tightens your pores as it dries and it squeezes and draws out the toxins!  Amazing, right?

Now, I did notice that one treatment did not cut it (we were talking about DECADES of build up).  I used natural deodorant after my first detox treatment but noticed that it did not work over night.

I did a second mask treatment, showered and applied natural deodorant and noticed a BIG difference!   I did a third one the next night just to be sure.  THAT’S when I noticed that natural deodorant WAS working!

One thing I did notice, is that natural deodorants do allow you to sweat.  That takes some getting used to.  But your body NEEDS to sweat!  The aluminum in anti-antiperspirants clogs your pores where you can’t sweat.  But, since the detox and switching to natural, I’ve also noticed that sweat doesn’t equal stink. The natural deodorant fights odor while allowing your body to do what it needs to do.

So, next up is helping you pick a natural deodorant!  I’ve tried a DOZEN of them to weigh the pros and cons and I can’t wait to share with you what I’ve found.  Stay tuned!