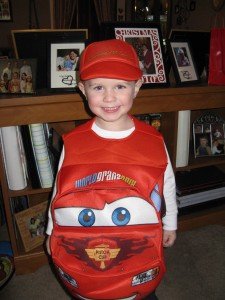 I had no idea what to get Bug for Halloween.  Of course we have our Thomas costume to use if we needed a Plan B.  But since he was an engineer last year I wanted to do something that wasn’t trains this year.  Even though he is very much about trains!

So I got online to browse kids costumes the other day not really knowing what I was looking for.  We don’t do “super heros” so Batman, Spiderman, Ironman, and all that were out.  Of couse, we don’t want anything scary either.  He’s much too young for that.  So I was clicking through pages of boy’s costumes.  Where we live in the South, you never know if it’s going to be 75 or 45 the night of Halloween so I steer clear of anything costumes that come as a one peice suit or that’s very thick.  (He was a monkey two years ago and halfway through the fall festival at our church that year he was running around with just the pants with the tail and monkey feet because the bulky top and hood were just too hot.)

So I’m looking through the pages when suddenly I see the Deluxe Lightning McQueen Boys Costume.  I called Bug over to the computer and asked, “Who’s that?”

“Whitnin’ Queen”, he said.  He has just taken an interest in Cars. He’s never seen the movie, but it’s hard not to see the characters because they are everywhere. He has a couple Cars books and toys and he really likes Lightning McQueen or “Whitnin’ Queen” as he says.  ;)  So I asked him if he wanted the costume and he said yes.  Great.  Done with the costume choice!

The costume came from Wholesale Costume Club and is one size fits most.  It fits his little three-year old self well enough (I may end up pinning the back up so Lightning doesn’t hang down so far.)  But it’s definitely got plenty of growing room so he can get lots of play out of it!  (He loves to dress up – he has a Thomas the train costume, Engineer hat, Firfighter hat, hard hat and other items in a box in his closet for dress-up play.  And this will make a nice edition to our box.)  I was pleased with the hat – it has growing room too.  (The last costume with a hat we got, the costume had growing room but the hat was almost already too small)

The hat and Lightning are made of thick, durable, padded fabric.  The whole thing velcros in the back in three places (around the neck and under each arm.  He’s very happy with his costume (can’t you tell?)  He loves to “race” around with it on.  Happy Halloween!

I received this costume for review from Wholesale Costume Club.  All words and opinions are mine.  No other compensation was received for this post.