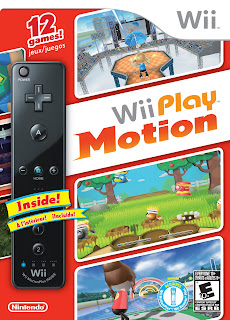 Nintendo was kind enough to send me a copy of the new Wii Play Motion game.

I can’t say enough good things about the Wii Play Motion. It’s a disc of 12 family friendly mini-games. And there is something for the whole family. Bug is 2.5 and he LOVES the Ice Cream Scoop game. (“Do again! Do again! Do again!” he says!)

He has to have help with the “Veggie Guardin'” game but it makes him laugh hysterically!! (Think Whack-A-Mole on a video game!) He wanted to show his MeMaw and PePaw his new “box” (what he calls the Wii) when they were over one day. He picked the Veggie Guardin game to play and had the whole room laughing before it was over!

I liked “Target Practice”. It reminded me of “Duck Hunt” on the original Nintendo when I was a kid.) And the pinball inspired game was pretty fun too.

Pick up a copy today and you won’t have to worry about hearing “I’m bored” this summer!

Thanks Nintendo for providing my family with this fun game to play together! All opinions expressed in this review are my own.

Check out my review of the Nintendo Wii and Wii Sports.