It’s been a while since I participated in Toddler Talk Thursdays and I hate that I never seem to have time for it because it’s a fabulous idea for a blog hop!  I know that most of you follow my blog for all the money-saving madness but a lot of you out there are moms just like me and it’s nice to share about our kids!

Toddler Talk Thursday was created as a place for moms and dads of toddlers to come together over a weekly topic and share ideas, go-to toys, or products. It is a great way to meet other bloggers of toddlers. Each week the topic will be different; we invite you to link up, share your weekly Toddler Talk!

This week’s toddler talk is about loveys!


Bug has ALWAYS been a “blanket baby”!  He looooooooooooooves his blanket!  We have three that are all similar (not exactly the same, but similar) and he is equally happy with any of them and has been known to carry two around at the same time! 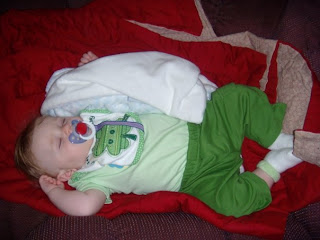 Even at a just a few weeks old, he was attached to his blanket.  He would get fussy and everyone around me, eager to give the “new mom” some “advice” (read – tell the dummy what to do), would tell me, “oh, he’s hungry” or “have you checked his diaper?” when I knew what he wanted.  To be wrapped in his blanket so he could go to sleep.  (“Wow” everyone would say, “that’s all it takes to quite him down?”)

Here he is at close to 5 months old with one of his blankets.  It’s funny…he still sleeps like that!  :)))

For Christmas last year (2009) we got him “Boo Bear” which is one of those loveys with the bear head and small blanket attached!  at 14 months old, leaving the house with “Boo Bear” was much easier than leaving with a blanket.  And he was going to moving up to a new class in daycare where constant blanket dragging around would not be possible, but a smaller lovey to help in the transition was perfect! 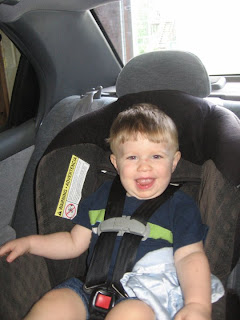 I can’t believe I don’t have a better picture of him and Boo Bear that I can easily find.

This was last summer when we turned his carseat forward facing – he was loving it! – so I snapped some pictures.  He’s got Boo Bear in the seat with him.  :)))

He doesn’t carry Boo Bear much anymore (read – it’s not a life or death situation if Boo Bear doesn’t make it out of the house with us).  He will drag one of his blankets around the house most of the time and he MUST have it at bedtime/naptime.  And occasionally, will ask to take it with us in the morning – which is fine.  When we get to school, we leave it in the car, tell it “bye”, and it’s waiting on us again at the end of the day.  (Oddly enough, he gets by without it at naptime at school just fine!)


My little boy is growing up!


Thanks for reading my Toddler Talk Thursday!