I love Kohl’s!  I got a couple Kohl’s giftcards for Christmas/birthday.  And last weekend I had plans to meet a good friend for dinner.  Perhaps you know her?  She blogs at Couponing to Disney :)))  Anyway, so we were going to dinner last Saturday.  Hubs works half a day on Saturdays so he gets home after lunchtime.  When he got home I had just put Bug down for his nap.  So I said….Since Bug is napping, mind if I slip out early so I can get some stuff done.  He shrugged his shoulders and said “Sure.”

Sure?  SURE?  I can have multiple kid-free hours????  WAHOOOOOOOOO!

So anyway, I left so fast I made Hubs head spin!

When I got to Kohl’s, I headed straight to the clearance racks.  That’s how I roll.  Here’s what I got:  (Yeah, I realize it’s a lot of purple…weird.  It’s just what I gravitated too…) 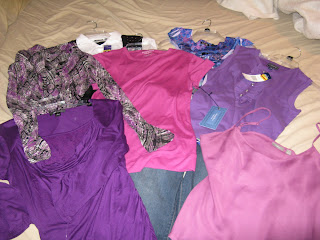 Plus two things not in the picture – a new purse and another shirt a lot like the one in the center of the picture.

The jeans were the only thing not on clearance (I’m a short curvy girl so I have to picky when it comes to jeans) but they were on sale for $21.99.

The purse I got was on clearance for $17.60 (apparently, shopping for a purse is setting yourself up for highway robbery – the purse was originally $44!)

Who wouldn’t get excited about that??