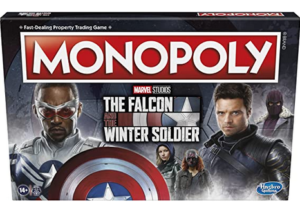 Ok, I saw this a couple weeks ago for $12.50 and I knew it would be a great Christmas present for G but I didn’t get it and the priced crept back up to $21.99.  So I decided to be patient and I got lucky MUCH sooner than I thought I would!

Right now MONOPOLY: Marvel Studios’ The Falcon and The Winter Soldier Edition Board Game is $10.80 which is over $11 off it’s regular price of $21.99!

And yes, I ordered it this time!  It’ll be under the Christmas tree!