To leave a sweeter taste in motorists’ mouths as they feel the pain at the pump, Krispy Kreme announced today that it is tapping its “strategic doughnut reserve” and will price a dozen Original Glazed® Doughnuts at the United States national average for a gallon of regular gasoline on Wednesdays, beginning April 13 at participating shops throughout the U.S.  (Canadian shops are not participating)

Krispy Kreme will set the price for an Original Glazed dozen each Wednesday, April 13 through May 4, based on the national average price of a gallon of regular gasoline in the United States on the Monday at the beginning of the week.

They will announce on Tuesday what that week’s price will be.

That means this week, April 27, a dozen doughnuts will cost you…. 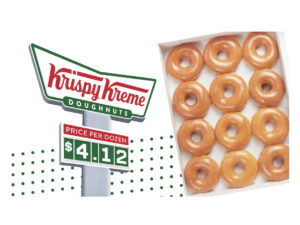