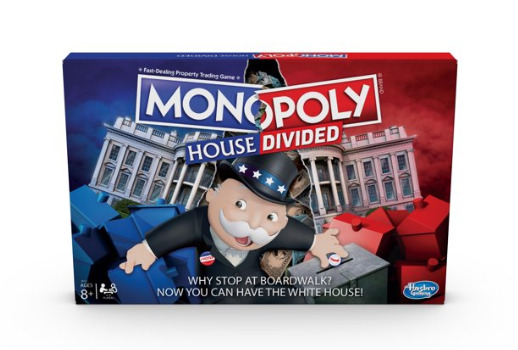 My 12 year old has already put this on his Christmas list! And since it’s more than half off regular price, now is a great time to buy it!

The Monopoly House Divided board game celebrates the ups and downs of an election campaign. Imagine being in the midst of it all with this exciting game for families and kids ages 8 and up. Players buy states, earn votes, and collect rent. Establish Campaign Headquarters to earn more votes. Executive Power cards and I Voted cards let players do a variety of things such as steal states or send opponents to Jail. Those lucky enough to get the White House token can double the rent they charge, and add more votes at the end of the game. When all the states are claimed, the candidate with the most votes wins!

Get Monopoly House Divided Board Game: Elections, White House Themed Game, for Ages 8 and Up for just $6.39 at Walmart.com right now (regularly $19.99!)