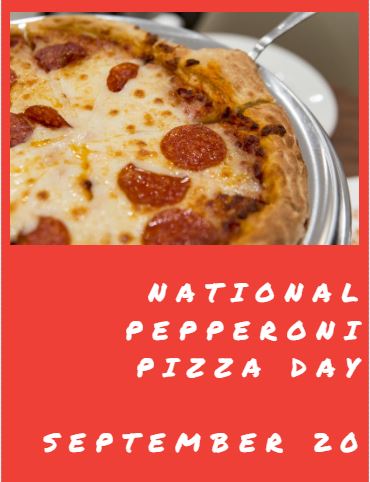 So, do you put pepperoni on your pizza or not?

If you feel like having pizza on National Pepperoni Pizza Day, September 20, 2020, here are some specials for you:

Get “Double Flames” (rewards points) when you order any pizza with pepperoni through the Blaze app or their website.

The new “Lunch Box” delivery deal — available through CPK.com, DoorDash, Uber Eats, and Postmates — gets you an adult entrée and kid entrée for $20 or less.

Use the code “PICK2” to get your pick of any two items from a limited menu with each item costing just $5.99. The options include pizza, sticks, soda, and cookies.

$6 National Pepperoni Pizza Day deal! The offer is for a large signature pepperoni pizza on original crust, and it’s available as an online only deal on Sept. 20.

New app users get a buy one, get one free pepperoni pizza deal through the Pie Life Rewards app on September 20, 2020.