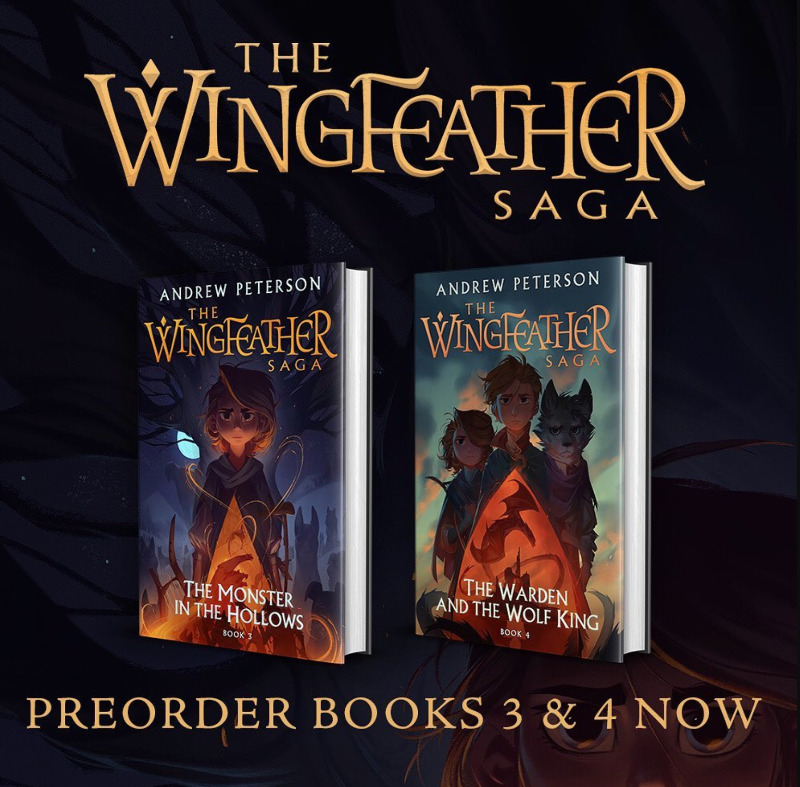 We discovered this book series during quarantine because the author, Andrew Peterson, started doing a nightly read aloud of book one on Facebook live! The Wingfeather Saga instantly became a HIT in our house.

If you’re looking for a book series the whole family can gather ’round and read, THIS IS THE ONE!

Haven’t heard of this amazing book series?  That’s okay, I’ll fill you in!

There is an animated short film (15 minutes) that gives you the opening synopsis of book one, On the Edge of the Dark Sea of Darkness.  We watched it (free to watch on Amazon Prime.  I think it might also be on Youtube?)  After watching it we KNEW we wanted to listen in on the read aloud.

Now you might think since you’re just now finding out about this that you’re behind and there is no catching up.  But you can!  Of course, you can order the books for yourself and read them (The Wingfeather Saga Book One: On the Edge of the Dark Sea of Darkness and The Wingfeather Saga Book Two: North! or be Eaten are available in the newly released illustrated hardcover edition.

Are you a Wingfeather fan too?  GREAT!  You can PREORDER books 3 and 4!

This way you won’t have to wait – when you preorder with Amazon, you generally get items ON their release day without having to leave your house!  Plus, they’re $13.99 regular price, but $12.59 right now.  If you preorder them, you won’t pay more than $12.59 BUT if they go down between now and release day, you’ll pay the lowest price!

Preorder The Wingfeather Saga Book 3: The Monster in the Hollows

(We aren’t finished with book 4 yet, but book 3 has been my favorite.  Have tissues.)

Preorder The Wingfeather Saga Book 4: The Warden and the Wolf King

You know they’re good books when it’s a month to go to release date and they’re already #1 Best Sellers in Children’s New Releases!!

We enjoyed books one and two during quarantine but were fretting about having to wait until SEPTEMBER to read three and four!!  But then the libraries opened back up and we were able to get our hands on a copy of the third book and finally (after a looooooong hold list) started the fourth book last week.

BUT since we purchased books one and two in their NEW illustrated hardcover editions, we will certainly be purchasing three and four to match!

What’s even better is that ALL the nightly readalouds are still available on Facebook.   This link will take you directly to night one.  Each night’s reading is 40ish minutes or so.  It’s so great to actually hear the author read his own books!

I really hope you’ll check out these books. The Wingfeather Saga is great for all ages.  Hopefully you’ll enjoy it together as a family!