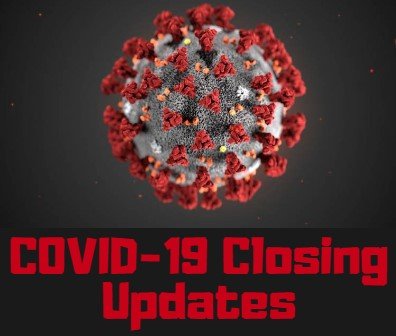 There’s no doubt that the COVID-19 pandemic has changed life as we know it.  Stores are having to implement plans and change the “business as usual” model to adapt to quarantines, supply shortages and self-distancing.  Here’s a continuously updated list of Coronavirus closings updates.

Aldi – stores new operating hours are 9am to 7pm

Dollar General – Dollar General will close one hour earlier than posted store closing times to allow employees to clean and restock.  Also, they are asking shoppers to allow the elderly to shop the first hour of the day.

Publix – Stores open at 8am and are now closing at 8pm for cleaning and restocking.  Pharmacy hours are 9am to 6pm.  UPDATE – stores will open at 7am for seniors and high risk shoppers.

Sprouts  – store hours are now 7am to 8pm

Target – Stores will close at 9pm.  The first hour of operating hours on Wednesdays is being designated for high-risk shoppers.

Walgreens – most locations are adopting a 9am-9pm schedule, including stores that were previously 24 hours.

Walmart – New policy effective March 19, 2020, Walmart U.S. stores will open at 7 am and close at 8:30 pm. Associates will still be working regular hours around the clock stocking and cleaning.  From March 24 to April 28, Walmart stores will have an hour long “Senior Shopping Event” every Tuesday starting one hour before opening (so, from 6 to 7 am) for customers 60 and older.  Read more about it here, including item limitations and temporary Auto Center closures.

Winn-Dixie – reserving the hour between 8am and 9am, Monday-Friday, as shopping for seniors and at-risk groups.  Read their recommended shopping policies here.

Here’s a handy at-a-glance visual to some of the more popular stores: 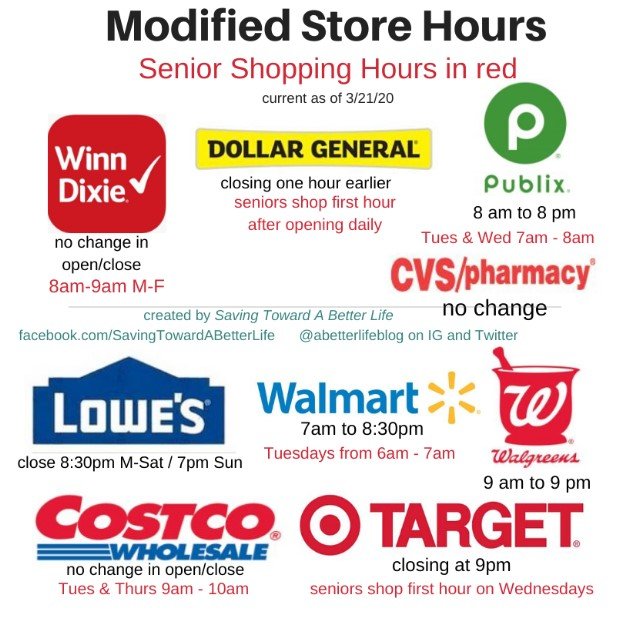 Pretty much all restaurants at this point have closed their dining rooms and gone to drive-thru, carryout or delivery only.

Chick-fil-a – drive thru only service

Panera – drive thru only service

Starbucks – precautions being taken on a store by store basis

Taco Bell – drive thru only service

Take advantage of services like GrubHub and DoorDash so you don’t have to go to restaurants in person!

Bed, Bath and Beyond –  temporarily closing 800 stores that do not have health and beauty departments thru 4/3

Five Below  – closed until at least March 31st

I’ll keep you posted on Coronavirus closings as I hear of them.  Know of something not listed?  Drop a comment! 👇

I believe Kohls is now closed until further notice.

Previous post: Walgreens: FREE Shipping on all orders & 20% off!