Going to the movies is out of the question right now. But here’s your chance to see theatrical releases AT HOME.

Disney/Pixar’s ONWARD just came out in theaters just before this madness broke out.  If you didn’t get a chance to see it, you can BUY it on Amazon right now!

Disney+ released Frozen II early but if you don’t have Disney+ you can rent it from Amazon right now also. 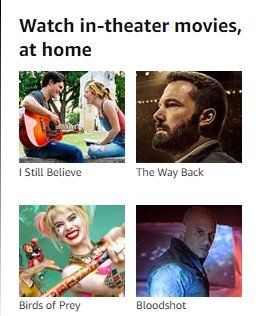 Looking for something to watch after the kids go to bed?  Amazon Prime Cinema also has: