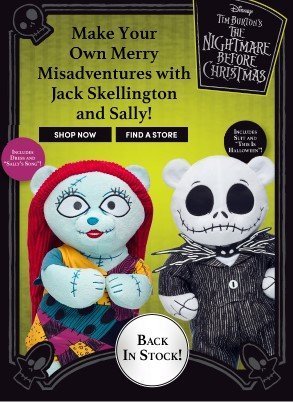 Build-a-Bear is my nemesis.  G had been wanting a Build-A-Bear for a very, very long time and I had been putting him off and putting him off until they had something I felt was worth the money, that G would love and not forget about in 2 weeks.  That’s how we ended up with the Toothless Build-A-Bear this summer.

OH, if I had just waited a little while!  I’m dying over the Nightmare Before Christmas Bears and I’m hoping and praying G never sees the Jack Skellington Build-A-Bear!

They won’t arrive by Christmas unless you pay for the mega-ultra-fast shipping BUT they’re supposed to be in stock in stores too.

You can currently save $10 off $30 in store or online with this coupon but it excludes Nightmare Before Christmas. 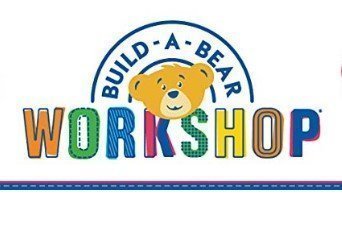 You can shop Build-A-Bear Workshop on AMAZON and Prime members get shipping by Christmas!  Unfortunately, Jack and Sally aren’t available through the Build-A-Bear Amazon store, but Toothless is!  As are several Disney Bears including Frozen II, Lion King and Aladdin!

Shop through TopCashBack when you shop Build-A-Bear online to get cash back on your purchase!