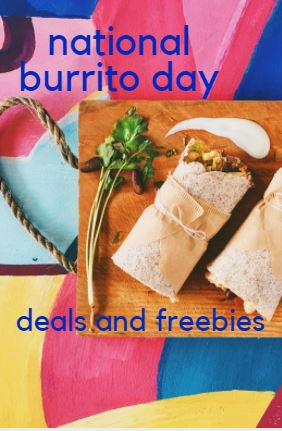 Is April 4, 2019, National Burrito Day!  It happens on the first Thursday in April!   Here’s where you can find the deals and freebies – read closely because some are happening on other days besides April 4th:

Burrito lovers can take advantage of free delivery on any order worth $10 or more placed through Chipotle’s app or Doordash on Thursday, April 4th only.

Spend $5 on April 4th and get a FREE 1/2 pound Bean & Cheese Burrito with your order.

On April 4th, El Pollo Loco is celebrating National Burrito Day by offering Buy One Burrito Get One Free!  Just print or show this coupon to the cashier. Valid at participating locations.

Possibly the biggest announcement of all of National Burrito Day – $5 BURRITOS at MOE’S on April 4th!

Participating Taco John’s locations are offering two beef burritos for $4 through the app.  Bean burritos will be $1.

If you have a local place not on this list, it might be worth checking to see if they have a deal also!