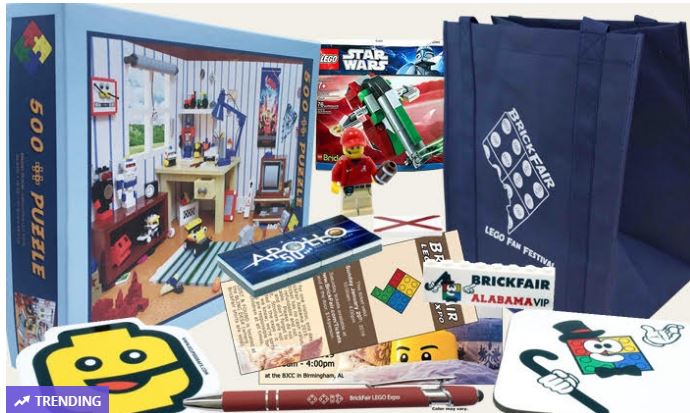 The Brick Fair LEGO Fan Expo is coming up in Birmingham, AL, NEXT WEEKEND!  January 19 & 20, 2019.  I’m so glad I checked Groupon because they have a Brick Fair discount tickets deal!

Tickets to the Brick Fair are $14 online through Brick Fair or at the door.  Making admission for 2 a total of $28.

Groupon’s deal is admission for 2 PLUS a SWAG BAG of LEGO GOODIES for $38.

I know it’s not technically Brick Fair discount tickets but if you’re going anyway, here’s a chance to grab a bag of swag for the kiddos!  I know my son will be so excited to see all his swag!  Then the temptation to spend more money there will be eased because you have some pretty awesome LEGO goodies in your bag!

The bag is EXCLUSIVE to Groupon purchases (you can’t purchase it at the fair) and contains:

It appears that it’s just ONE goodie bag per Groupon purchased even though it’s two tickets.  BUT you can purchase more than one Groupon voucher.  So a family of four could purchase two Groupons to get four tickets and two goodie bags.