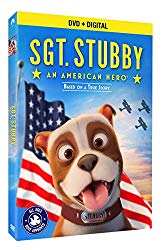 Here’s your chance to put a movie for the whole family under the Christmas Tree!  You can pre-order online now, get it in store on Tuesday OR enter for a chance to win a copy for Christmas! (keep reading!)

Sgt. Stubby: An American Hero is a heartwarming tale that’s destined to be a classic and is already a family fave in this house!  Y’all, I cried real tears at the movie.  (Don’t worry, Stubby has a happy ending – just so many emotions in this movie!)  It’s based on a true story (Yes, Sgt. Stubby was real!) and takes place during WWI.  My 10 year old learned so much about the war in this 84 minute movie.  (Family friendly AND educational – for the win!)

The movie is rated PG for the war scenes.  But I give it two thumbs up for the whole family as long as you don’t have super sensitive little ones.  If you’re concerned, I’d suggest pre-screening it or only showing it to older kids.  (The troops wearing their gas masks is a little scary looking!)

About SGT. STUBBY: AN AMERICAN HERO:  With the “War to End all Wars” looming, the life of Army “doughboy” Robert Conroy  is forever changed when a little stray dog with a stubby tail wanders into a training camp in New Haven, Conn.  Conroy gives his new friend a meal, a name, a family and the chance to embark on an adventure that would define a century.

About the Real-Life Stubby:  Before he was a hero, Stubby was homeless, unwanted, unwashed and unloved, scrounging for scraps on the streets until he was taken in by Private First Class Robert Conroy of the 102nd Infantry Regiment, 26th “Yankee” Division.

In France, Stubby saw frontline action in four offensives and 17 battles. He found wounded soldiers, saved an entire company by alerting the men to don gas masks and even caught a German spy.  After the recapture of Château-Thierry, the women of the town made him an embroidered jacket that would serve as Stubby’s uniform and display his numerous awards throughout the rest of his career.

The movie comes out on DVD/Blu-Ray, Digital and Streaming on Tuesday, December 11th. 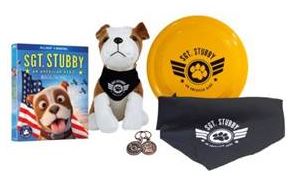 Paramount has one Sgt. Stubby Prize Pack for one lucky winner that will ship in time for Christmas!  Get your entries in on the form below!   This will be a short giveaway so we can get that prize out for Christmas!  Just one week!
a Rafflecopter giveaway