This post is sponsored by OnlyNaturalPet.com.  Links in this post are affiliate links.  Thanks for stopping by.  I appreciate your support! 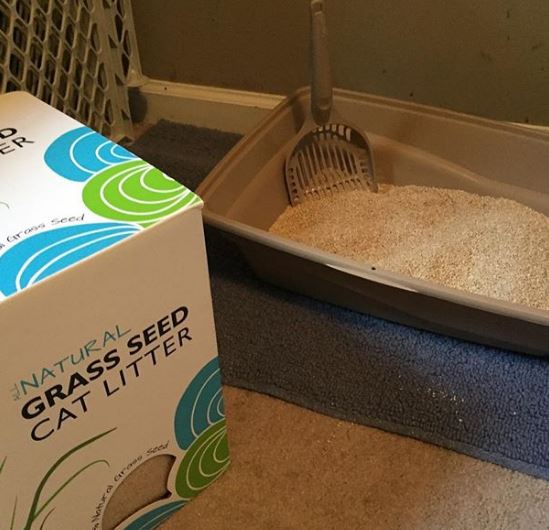 Did you know that Grass Seed Cat Litter is a thing? I had never heard of it until Only Natural Pet approached me about trying it. Since bringing three new kittens into our one cat household, I’ve been on a mission to find the “perfect” cat litter. Because let me tell you, what works for one does not necessarily work for four.

So what does the website say about grass seed cat litter?

Only Natural Pet Non GMO Fast Clumping Grass Seed Cat Litter is a fast clumping, easy scooping litter for single or multi-cat households. Exceptional odor control with no synthetic fragrances or chemicals, the natural grass cat litter uses quick clumping action to prevent odors from releasing into the air. Plus, grass litter is 99% dust free with no tracking, meaning it’s just as clean outside of the litter box as it is inside.

Completely flushable and biodegradable, Only Natural Pet Grass Seed Cat Litter is Non-GMO Project Verified and sustainably farm-grown in the USA. Made without sodium bentonite or silica, it is a completely renewable, environmentally friendly litter. 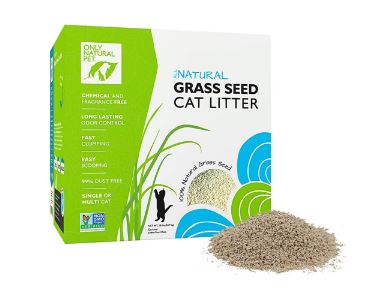 So how does it stack up to its claims in a FOUR cat household?  Here’s what I’ve observed from using it for about 3 weeks now. 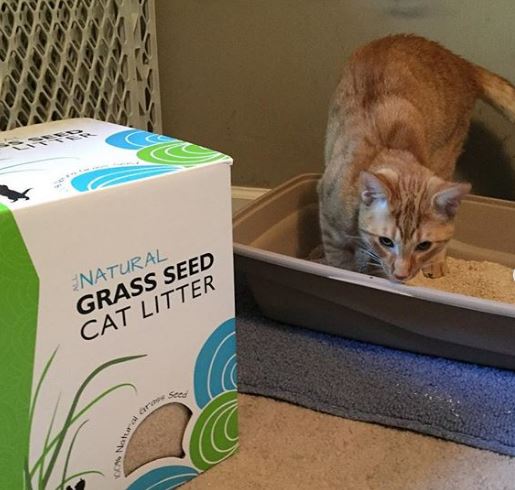 It is very fine so I would suggested a covered box or at the very least, a high sided box.  Especially if you have a litter-kicker.  See culprit in exhibit A – photo above.  Seven seconds after I snapped this picture he started kicking around like he was playing in a sandbox.  The lid to this box was promptly added.

Also, I had to pour this a little deeper than other litters.  Because it’s so fine the cats kick ALL of it over their poo – leaving empty spots in the boxes.  So I pour it a little deeper to give them more.  But even with pouring more in, this litter still lasts forever.  It clumps so tightly that you don’t lose any when you’re scooping and what stays behind stays cleaner than other litters.

I got the box that has two 18-pound bags in it and after three weeks I’ve only just opened the second bag.  (Full disclosure though, I’ve only been using this in two litter boxes – we have a total of 6.  But we also have 4 cats.   And I can tell you that they prefer this litter because I have to scoop these two boxes more than the other 4.

I run a Certified Green rescue and we are always on the look for sustainable ways to help the environment AND make our cats happy. Do you happen to work with 501c3?

You would need to contact Only Natural Pet directly. I just reviewed their products.