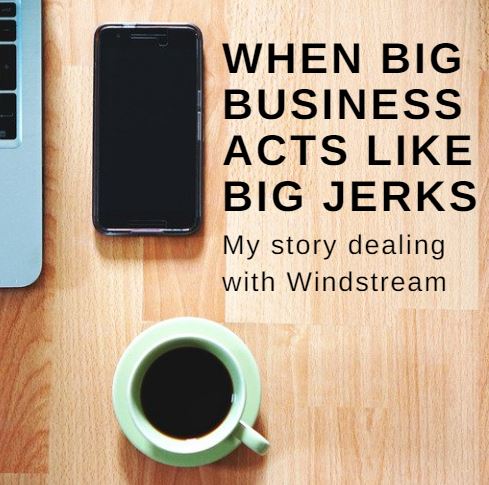 I’m not even sure how to start this story because I’m so fuming mad.

So, I live in central Alabama. We have Windstream for our internet service and it’s crap. It’s been crap for a long time.  (But until recently, there haven’t been a lot of other options for our area.)

In fact, it’s been so crappy for so long people have started suing Windstream because of paying for 12 Mbps and only getting 3 Mbps on a good day.

So this class action was started to say, “Hey, Windstream, fix your stuff so you can deliver what we are paying for.”

BUT being sued for having the worst possible service and charging people for something they can’t deliver on wasn’t enough to spur Windstream to do better. So they let the cases go to court.

And they started losing.

Clearly it had never occurred to them that they might lose.

And sp they started having to pay out so much in these settlements that they started contacting members of the lawsuit and offering them a pittance of a settlement to keep from having to go to court. (They offered us $1000 – but legal fees had to be paid out of it and my portion of what was left would only be a credit not an actual payment – a credit to a company I’m probably about to drop because their customer service is crappy.)

So on Friday night (after business hours) they shut off service to those accounts still involved in the arbitration (lawsuit).

I hope your brain just said, “But that’s illegal”, because it is.

And if you called their 24-hr tech support line, you were told that there was “a block on your account” and they gave you a number that you could only call Monday-Friday during “regular business hours”. That’s it. That’s all they could do.

So we went all weekend without internet. Shady, Windstream. I see what you did there.

So I call this morning (Monday) and find out what’s going on. AND I’m told that on 6/19 when my bill is due I will be charged the full amount even though I haven’t had service since 6/1 because they aren’t going to prorate accounts that are in arbitration.

I hope your brain just said, “But that’s illegal”,  AGAIN.  Because it is.

There is supposed to be a hearing tomorrow where our attorney feels reasonably sure that the judge will rule in our favor and say to Windstream – HEY, MORONS, YOU CAN’T TURN OFF CUSTOMERS’ SERVICE JUST BECAUSE THEY’RE MAD AT YOU.

Windstream knew this injunction was coming on Tuesday but they chose instead to go ahead and cut off service because they think the judge will rule in their favor and tell them they can.

Windstream has now spent, and is continuing to spend, a lot of money to fight their own customers to not have to provide the service customers are paying for.  Instead of just using that money to FIX their systems and deliver what they advertise.

I hope your brain just said, “That’s CRAZY!”.  Because it is.

I’m sure this post will only be part one of a multi-part story.

We won the court order saying that Windstream can’t turn off our service because we are in arbitration.  (Which shouldn’t have even had to happen because it says in the Terms of Service that they won’t turn off service if we are in arbitration with them – but clearly they aren’t keen about following their own rules at the moment).  The court told Windstream to turn our service back on as soon as possible but didn’t get them a time limit to comply.  So I don’t have my hopes up for it being back on today.  We will see how long they drag their feet about turning my service back on.