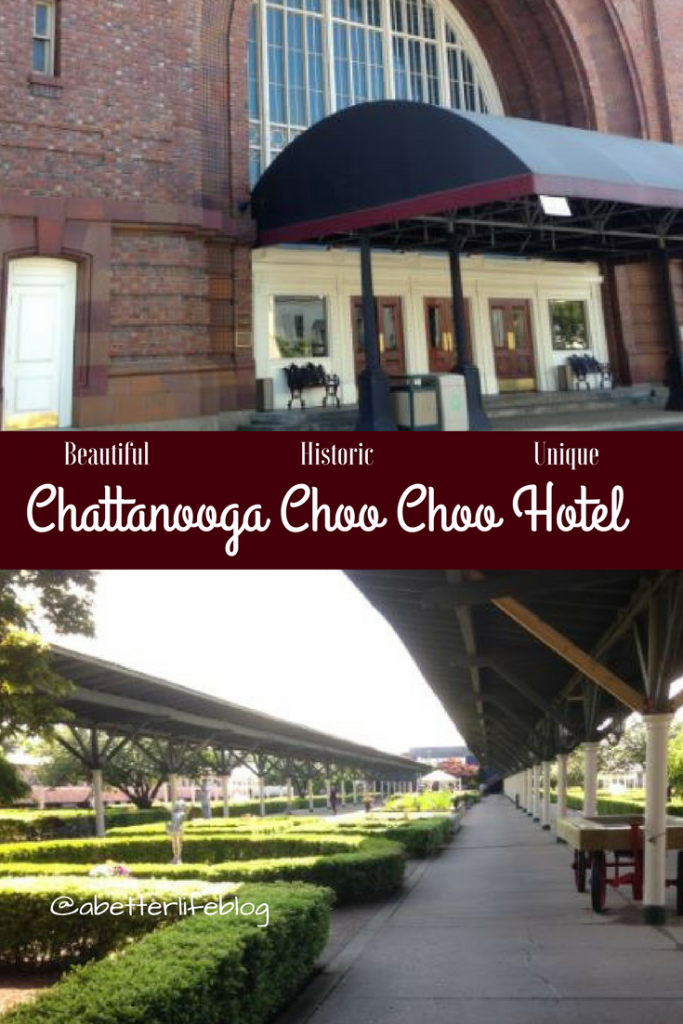 The Chattanooga Choo-Choo Hotel is a hotel I grew up going to.  All totaled I think I’ve been there 8 times – 4 as a child and 4 as an adult.  It has certainly changed a lot in the last 20+ years.  But I will try not to wax nostalgic too much in this post.  I will stick to the facts and tell you about our stay in April 2016 (with a few references to our two 2013 stays also). 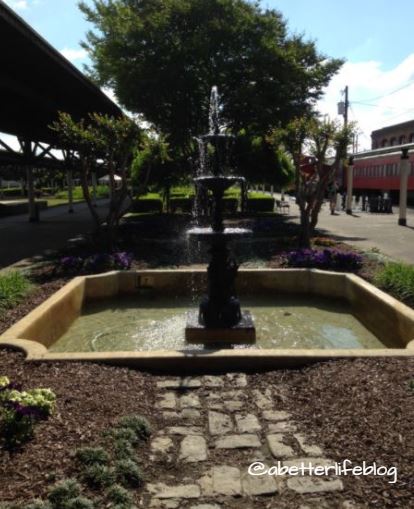 One of the biggest draws of this hotel is the atmosphere and the history.  Gardens, fountains, trains, shops – you feel like you’re strolling into the early 1900s.  There are several dining, shopping and entertainment options right on the grounds of the Choo-Choo so you don’t even have to leave the hotel to have a good time.  But, if you want to venture out, downtown is right outside the door.

Which is probably another big draw of the hotel – it is right in the middle of downtown.  AND there is a shuttle stop in front of the hotel.  The shuttle is FREE public transportation for downtown Chattanooga.  The line runs from the Choo-Choo all the way down to the Tennessee Aquarium – with multiple stops in between with dining, shopping and more.  We hopped off the trolley to eat and go to the Creative Discovery Children’s Museum.  My son was 4 the first time we took him to Chattanooga and to him, riding the trolley was part of the fun of the trip.  It was hard to get him off of it! 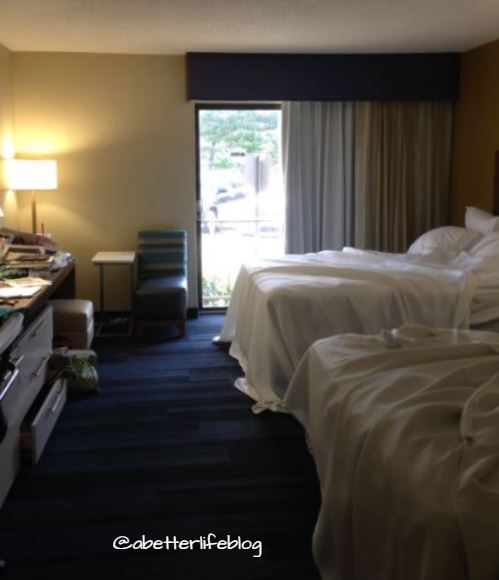 Our 2016 stay was in the newly renovated rooms in what they call the MacArthur Building.  (In 2013 we stayed in a room in a building that isn’t part of the hotel any more – so it was nice to see the new rooms)  Also, super sorry I didn’t get a picture of the room before we messed it up.  #travelbloggerfail right there.

It is your normal sized hotel room.  Plenty of drawer storage, a desk, and a cute little chair with attached side table. The beds are comfortable.  The room was clean.  The bathroom was adequate. 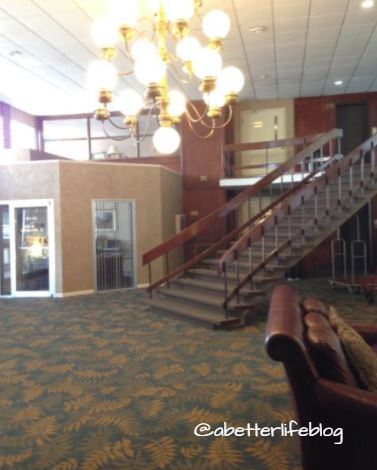 This is the lobby of the MacArthur Building containing the rooms.  I had to snap a picture.  I thought it was lovely.  Very vintage feeling.

To my back as I was taking this picture was the hallway that our room was on.  Just under the stairs to the right is the indoor pool.   There is also another hallway of rooms on the other side of the indoor pool area. 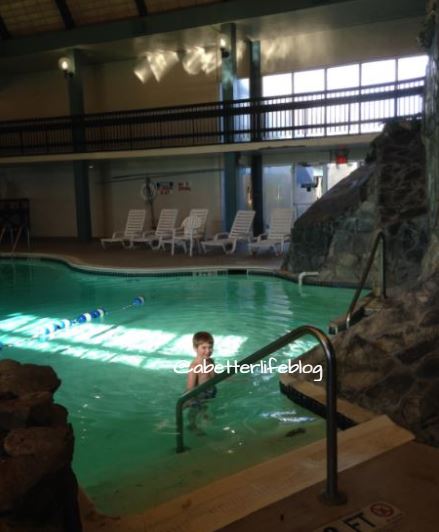 I can’t believe I didn’t get more pictures of the indoor pool area.  It’s a HUGE room and a nice sized pool.  You might be asking, “What’s with all the fake rocks?”  Well, 20 years ago there was a waterslide there – the stairs up to it were where that second bar is on the rocks and the slide came out on the far side of the pool just past that white pipe.  But…not getting nostalgic…nope, not me. 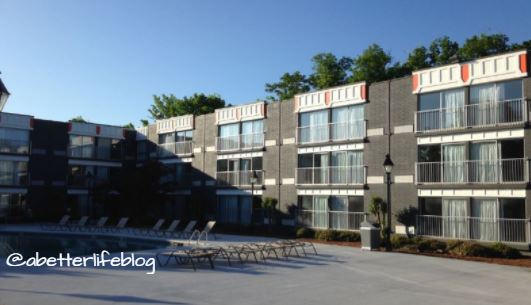 This picture is unrelated to the hotel review.  But it’s me not being nostalgic again.  This used to be one of the Choo-Choo Hotel buildings.  Now it’s apartments!  Yes, they’re called Passenger Flats and you can live in them – right on the grounds of the Choo-Choo Hotel!   They’re fenced off so hotel guests can’t wander around (I’m standing right at the fence.)  Also, not being nostalgic again, the pool at the apartment building used to be the coolest pool on the grounds – with a water slide, an “island”, a bridge and a waterfall.  Now, it’s just a pool.

Chattanooga Choo-Choo has a 6.2 (out of 10) rating on Hotels.com.   Personally, I would rate it a 9.  Especially since staying in the newly renovated rooms.  They are currently renovating train cars and common/public areas.  So the hotel is improving.  I read a lot of the negative reviews left and it had to do with things being old/worn out/dated (which they are fixing) or things that could have been addressed/fixed during the stay instead of coming home and leaving a bad review.  I am the type of person that will give the establishment a chance to make something right – not blast them later when nothing can be done about it.  (One reviewer gave them a 6 because there were ants in their room.  If the ants in the room were a problem, a quick visit to the front desk would probably have resulted in a new room.  Another reviewer gave them a 4 because they “felt like they were the only ones in the hotel” and it “felt spooky”.  What a ridiculous review!)

Why would I give it a 9?  Well, I really like the newly renovated rooms.  I love the grounds and the history of the Choo-Choo itself.  I love the convenience of the location (and the shuttle stop).  I like the convenience of on site dining.  Ok, and nostalgia has some part to play – the Choo-Choo was the “it” place in Chattanooga in 1990s when we vacationed there several times.  (3 buildings of rooms plus the train cars, three pools – two with water slides, more dining and shopping than there currently is… it’s almost sad to see what it is now when you knew what it was..BUT I said I was going to try to keep the nostalgia down for this post….)

I booked the Choo-Choo, through Hotels.com.  I paid $145 for our one night.  Which is about $30 cheaper than what I paid per night in 2013 when I books directly with the Choo-Choo.   Hotels.com lists the Chattanooga Choo-Choo’s lowest rate as $119.    I did a few searches of random dates and was quoted everything from $126 to $159.  (Train cars run a bit more.)  If price is not a huge factor, I would recommend the Choo-Choo.  The indoor pool, on-site restaurants, ambiance and shuttle stop are worth the little extra to me.  It’s also important to note that these really are average prices of the hotels in the area.  And you are paying a bit for location. 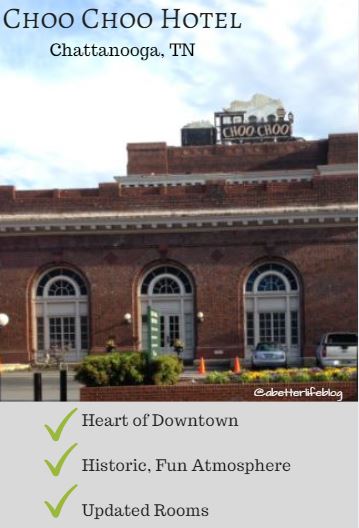 Check out these other hotels in the same area.

Don’t forget Hotels.com has a travel rewards program – one free night after 10 nights booked through Hotels.com!

Check out the travel page for more!