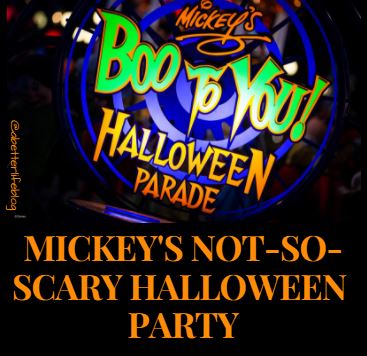 I was shocked to find out that there are people that visit Disney World in the fall that DO NOT get tickets to Mickey’s Not-So-Scary Halloween Party.  Inside I’m asking myself what is wrong with these people and on the outside I know I must be looking at them like they have three heads.

Why would you NOT want to go to MNSSHP??  Well, I’ve heard:

Ok, well maybe they didn’t say the last one…

But I just want to make clear WHY we LOVE Mickey’s Not-So-Scary Halloween Party (hereafter referred too as MNSSHP).   MNSSHP is a special ticket event that takes place in the Magic Kingdom on select nights from September through October. 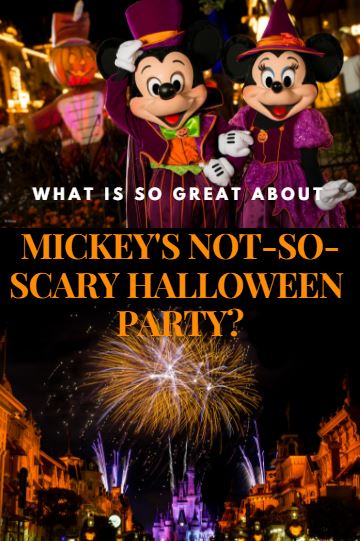 Let’s just get that out right now.  It’s great for the whole family.  There are no zombies or demon clowns, or crazed masked men with chainsaws.   If your kids are totally cool with Maleficent and Jafar then it’s all good because that’s as scary as it gets.

2. Trick or Treating in the Magic Kingdom

You won’t have to take your kids trick or treating on Halloween with all the candy you’ll get from Trick-or-Treating through the park!  You get a bag of goodies when you enter the park at party time and then there are trick or treat locations throughout the entire Magic Kingdom.  And it’s not just one piece of candy per stop.  It’s a HANDFUL.  And EVERYONE can trick or treat – even adults.  They give out small bags for party goers to use for candy but we always bring G’s big Halloween trick or treat bag also.  And this is GOOD candy, people.  The good stuff.  Would you expect anything less.

This parade is specific to MNSSHP.  And it’s ghoulishly fun.  You get to see characters you don’t normally see and it’s just really fun if you like parades.  (We’ve only seen bits and pieces of it because we’re too busy with #4 below)

4. The ride lines are short

This is really our favorite reason to go to MNSSHP.  We ride all.the.things over and over and over.  There are less people in the park than during regular admission and with the trick or treating and the special characters and the parade, not everyone is riding.  At one party, we rode Big Thunder Mountain Railroad THREE TIMES in a row.  We rode Barnstormer five times without even getting off because no one was in line.  At another party, towards the end of the night, we jumped in line for Seven Dwarfs Mine Train with only a 10 minute wait (a ride that usually sees a 60 – 90 minute wait on a normal day!)  After we did Seven Dwarfs, we rode the Tea Cups and we each got our own tea cup because there was no one else on the ride! 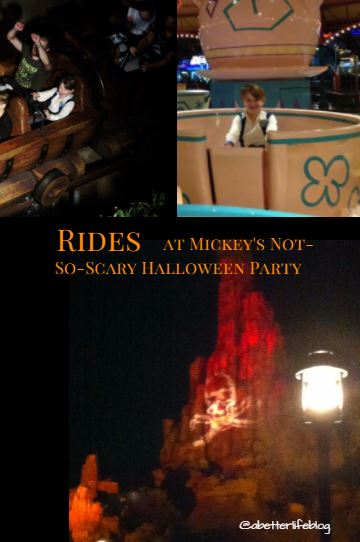 5. The rides are totally different at night.

Big Thunder Mountain, Seven Dwarfs and Barnstormer are some of our favorites and we totally love riding them at night.  Especially Big Thunder Mountain.  It’s AWESOME to ride at night! And you get to see the cool pirate skull and crossbones on the mountain.

Admittedly because we’re so busy with #4, we don’t take full advantage of this one.  But you can meet some of the 7 dwarves, an assortment of characters from Alice and Wonderland (Alice, Queen of Hearts, Mad Hatter, White Rabbit), Jafar, Genie, and others – characters can vary from party to party.  One year we met Jasmine and Genie (Jasmine does meet in Epcot on normal days but we had not been to Epcot on this particular trip. And Genie is not usually out on regular days).  G was only 5 on this trip and he did not want to stand in line to meet Jafar (Jafar is VERY tall and intimidating.)   We also got our picture with Goofy and Donald in their Halloween costumes.  Fun! 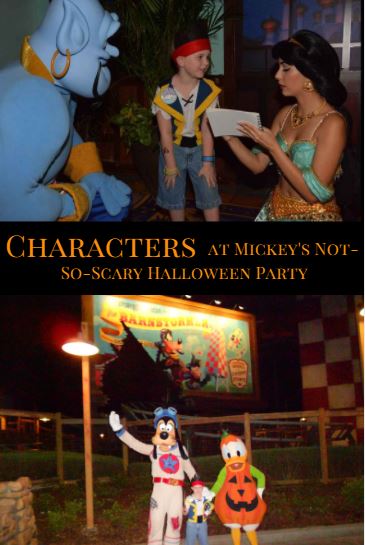 Don’t overlook the character experiences you can have at MNSSHP.

7. You can wear costumes to the park.

Kids AND adults!  Everyone can get in on the fun. (There are some costume guidelines you’ll need to check out before you pick your costumes)

AND it’s a lot more comfortable to wear a costume to the park at night than during the hot Florida days.   G loves to dress up but he usually sheds any costume pieces early in the day (and there are some things I won’t let him wear in the park during the day because I know it won’t last).  But at the Halloween parties, he’s totally comfortable dressed up. 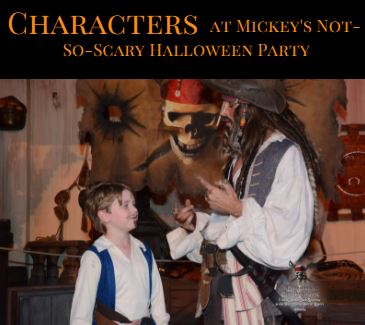 Jack Sparrow meets at regularly scheduled times during the day.  But at the Halloween Party, G was dressed like him.  The picture above is of one of my favorite character interactions ever.

8. Early admittance to the park with Halloween party ticket.

The party officially starts at 7:00pm BUT party-goers can get in the Magic Kingdom starting at 4pm with their party ticket.  Which means this is a GREAT option for either a “non-park day” of your trip when you don’t have a regular ticket.  In fact, I would recommend taking it easy the morning of your party day (sleep in, take a nap after lunch, etc) so you can last the whole party.

Or you can use your MNSSHP ticket to go and have fun at the Magic Kingdom without ANY regular tickets.  It’s cheaper than a one day ticket.  You get 8 full hours in the park (4pm to midnight) and all the extra fun!

So, I have to know – is Mickey’s Not-so-scary Halloween party a yay or a nay?

Tagged as: My Disney Trips