HomeDNA GPS Origins Kit: Find Out Where You’re From (Review)

I have always been interested in genealogy.  I, along with other members of my family, have done a good job of tracing our ancestry.  We’ve discovered our roots to the late 1600s in England/Ireland/Scotland.  But paper records can only go so far.  Where did our ancestors prior to the 1600s come from?  What nationalities make up our entire ancestry?

HomeDNA provided me with a GPSOrigins kit to try.  All opinions are my own.  I was not paid for this review.  This post does contain affiliate links.

These are the questions that the HomeDNA GPS Origins Test can answer!

So how does it work?

Well, there is a good bit of science involved so I’m going to let HomeDNA do the explaining:

GPS Origins™ is a revolutionary DNA test that enables you to trace your family history based on DNA mixture events that began over 1,000 years ago. It provides maternal and paternal migration routes with precision targeting—sometimes down to the village or town.

Current DNA tests used for genealogy locate where your DNA formed within countries or continents. Typically you find that some of your ancestors come from Western Europe, Africa, or South Asia, and you are given broad estimates of ethnicity. This type of DNA test generally cannot identify a radius of your origins to particular locations with longitude and latitude.

GPS Origins overcomes the limitations of older DNA tests by using a new ancestral tracking technique that leverages markers in your DNA to pinpoint specific places where your DNA was formed.

This DNA test is based on a new way of viewing human populations that considers everyone as mixed from different gene pools. This model is fundamentally different from existing ancestry testing which suggests that humans branched from just three or four populations that changed over time. Instead, GPS Origins relies upon genetic uniqueness created by mixing global gene pools in different proportions.

The test utilizes autosomal DNA inherited from chromosomes 1-22 which are more sensitive to the genetic signature of your most recent common ancestors. GPS Origins uses 36 gene pools to trace the origin of your DNA—more than twice the number being used by other methods. 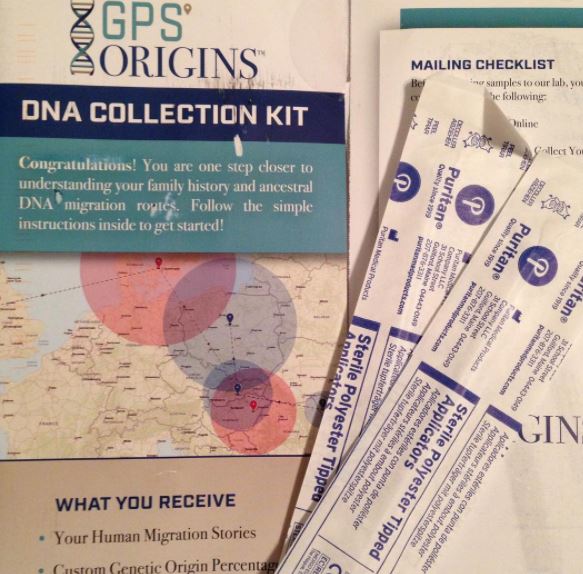 So, I requested my kit, did the cheek swabs (yes, just like on CSI!) and sent them in. Easy peasy. The hard part was the waiting….

It takes 2-3 weeks to process the results.

Finally, the email arrives that my results are ready! It’s time to see who I am!

*cue Moana*  “I am the daughter of the village chief.  We are descended from voyagers….”

Sorry, couldn’t resist. It’s the perfect song to get you hyped up about your ancestry.

It’s a LOT to process.

So the first results you are hit with are the Top 3 Gene Pools your DNA comes from. 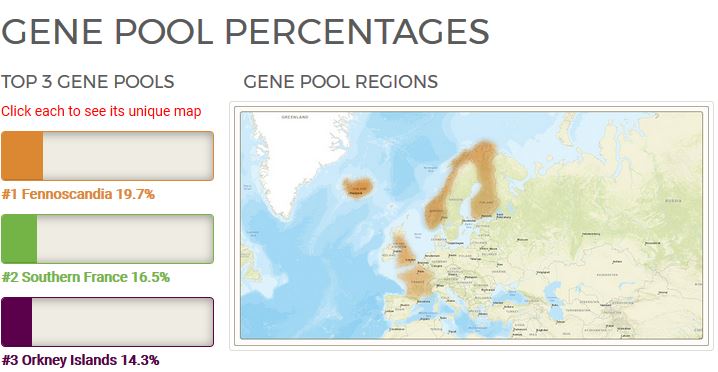 These are my actual results.  So my #1 gene pool is Fennoscandia – at almost 20% of my DNA.  Not really any surprises there.   16.5% Southern France was interesting but considering it’s close proximity to the British Isles (where we’ve traced all known ancestors too) there’s not bombshell there.  And 14.3% Orkeny Islands (Scotland) was expected.

You can click on each gene pool to see a little background on those gene pools.  This is a portion of Fennoscandia (it’s actually several paragraphs longer for each of the top 3):

So I’m like 20% Viking – that’s what I’m interpreting from this.  Awesome.  Maybe that’s where I get my wanderlust from.  My Viking ancestors that voyaged in search of new lands and new adventures!

But it doesn’t stop at the top 3 gene pools.  It breaks down your entire genetic makeup in percentages.

So here’s the rest of mine: 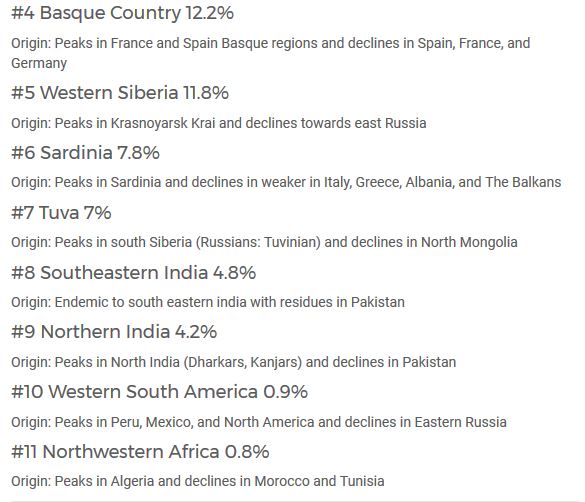 Numbers 4, 5 and 7 aren’t surprising.  Basque County overlaps Southern France which is #2.  And I expect Scandanavian ancestry to overlap with portions of Siberia (western Russia).  But #6 is Sardinia (Greece, Italy, Albania and The Balkans) – that’s interesting.  And if you had asked me to list places that I did not expect to show up, India would’ve been one of them.  And yet, there it is at #8 and #9 for a total of 9% of my ancestry – India.  And I wasn’t expecting Africa – but Morocco and Tunisia are in close proximity to Spain (and in turn to France) so it’s understandable.

Western South America wasn’t surprising since that includes North America.  We have (nearly confirmed) a Native American ancestor (that was at least 50% Native American) about 4 generations back.

Ok, so next – because the results aren’t finished! 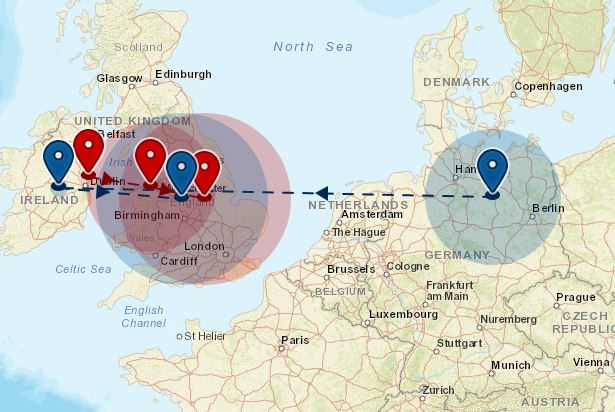 This is a map showing my ancestors migration routes.  One for my maternal ancestors and one for paternal ancestors (although the test cannot distinguish which is which so I don’t know if the blue line is Mom’s side or Dad’s side).

So one of my ancestral paths originated around Dublin (red) and didn’t move far.  To the west coast of England and then to the east coast near Manchester.  (When you zoom in on the map, it’s pinpointed very close to Nottingham.  Robin Hood?  Merrymen?  Maybe one of my ancestors fought against the tyrant Prince John or served King Richard the Lion Heart!)

The second path, in blue, originated in Germany, migrated to Ireland and then to England, not far from the red path.

Each on of these points can be clicked on to see more information about that point.  Here’s the blue pinpoint in Germany: 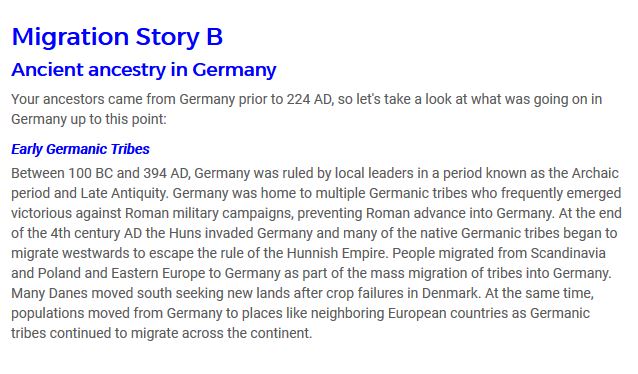 So it tells me that my ancestors were in Germany prior to 224AD and then tells me a little about what Germany was like then.

When I click on the red pinpoint in Ireland it tells me my ancestors were there prior to 334AD – when the moved to the second red point.

And that’s it.  Well, that’s a portion of it because I only shared a piece of each step of the results with you.  I took me a while to read and process each stage of the results because it’s a lot of information.

Now I’m not sure if I feel like my questions were answered or if I have more questions!

Get your HomeDNA GPSOrigins Test today and find out who you are!