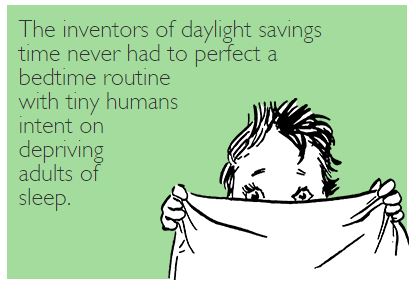 When does Daylight Savings Time begin in 2017?  This weekend!

I’ve always hated “springing forward”.  Always.  And then I developed a deeper hatred once I had a kid. 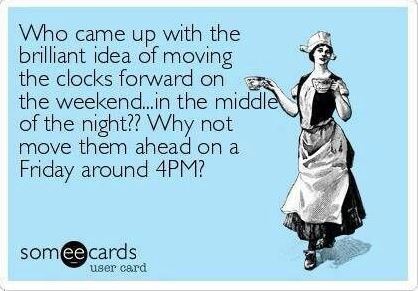 “Springing forward” with kids means you try to put them in bed earlier but it fails miserably so they go to sleep at “normal” time but then have to wake up an hour earlier.  Making them cranky all day.  Which would make you think they would want to go to bed earlier the next night.   HA!  You only think that if you’ve never had kids.  It doesn’t work that way.  The more tired they are the more they fight going to bed.

“Falling back” I never minded….until I had a kid.  “Falling back”…oh that lovely extra hour of sleep.  NOT.  Kids get up a “normal” time.  Which is an hour earlier after the time change.  And then this time they DO want to go to bed early because they are tired.  (Because kids are never consistent.)  Which means they’re up early the next morning…and the next…and the next.