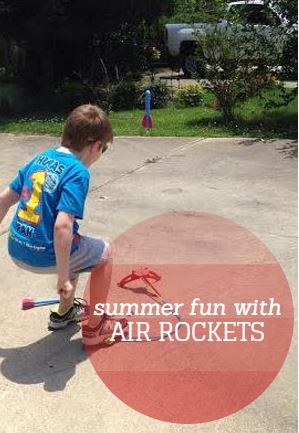 Looking for something fun to entertain the kids this summer that’s not electronic and gets them outside?

Model rockets have been both entertaining and educating kids for decades, and that hasn’t changed much in recent years. Today an estimated 9.6 million model rockets are launched every year by 2 million enthusiasts of all ages – roughly one-third of them girls – often igniting a lifelong interest in everything from science, math, engineering and technology to space travel.

Estes wants to help you nuture that interest and keep kids productively occupied outdoors.   From ready-to-fly models that come fully assembled to kits that can be put together in roughly an hour, model rockets come in all sizes, colors and altitude capabilities from 100 to several thousand feet. Prices start at under $10, and every rocket is reusable with a new engine, igniter and igniter plug.

Model rocketry is a great activity for kids 10 and up (adult supervision recommended under 12), an age where it begins getting harder to keep kids engaged without digital devices.

BUT you can have just as much fun with much simpler, ready-to-go, AIR ROCKETS!

Estes sent us a box full of their best air rockets to try out! 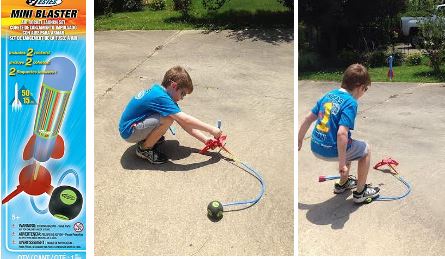 Let’s start with the Mini Blaster, priced at just $12.99.  This one is simple for kids of all ages.  G assembled it himself.  It does require some force to launch.  While I could just stomp on it real hard to launch it, G had to do a full on running jump to achieve the same force.   He still enjoyed it.  It provided an afternoon of fun.  It comes with two rockets of different lengths so we tried to make predictions and determine if one went higher than the other.  Verdict is still out on that.  But for $12.99, it provides adequate entertainment.  It’s recommended for ages 5 and up.  I’m considering getting another one to give to my nephew for his 5th birthday later this month.

Now that was pretty fun, but, all the stomping gets exhausting for dear ol’ mom after awhile.  Especially when it was determined that mine “always go higher”.

That’s when you need one of these: 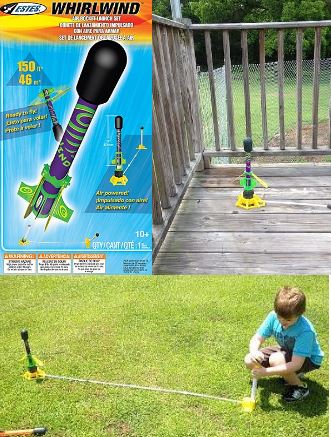 It’s the Whirlwind Air Rocket Launch Set priced at $27.99.    Now, these are a bit trickier to assemble.  It says ages 10+ with adult supervision or 12+ without.  I would love to shake the hand of a 12 year old that assembles this without frustration.  Because I got frustrated.  There are 4 rods that connect and twist together and I would think that I had them connected properly but as soon as we started pumping air, one would pop apart.  So patience is advised.

But once we got it together, it had it’s pros versus the more simple stomp rocket.  The first being that all you have to is give the handle a few pumps and then push a button and — ffwhomp! — off it goes!  And it goes waaaaaaay higher than the stomp rocket.

This particular one – the Whirlwind rocket – has the “wings” on it and it does some swirly twists and such in the air.  And then always comes down on it’s nice soft foam nose.  Unless your husband’s cousin is playing with it.  He somehow managed to break it because it came down the wrong way and it caused one of the yellow flaps to break.  So word of caution – while adult supervision is recommened – some adults are not qualified to be the supervising adult.  But never fear, because Estes does carry replacement rockets and you will not have to purchase the whole launch set over again.  Replacement rockets are $9.99. 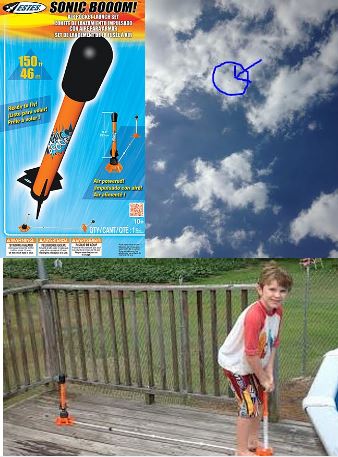 Alright, I saved the best for last.  Our favorite is the Sonic Booom Air Rocket Launch Set – also priced at $27.99.   It works just the same as the Whirlwind Rocket.  And on the same system.  It comes with it’s own set up but it’s interchangeable with the Whirlwind one.  In fact, you could buy the Sonic Booom Air Rocket Launch Set and just get a seperate Whirlwind replacement rocket and it would work on the same “launch pad”.  I am embarrassed to admit how long it took me to figure out that they were interchangeable.  I was hung up on the fact that the orange rocket had an orange pump with orange connector ends on it’s rods and the yellow rocket had a yellow pump with yellow connector ends on it’s rods, that I didn’t realize that was just asthetics and not because orange only worked on orange and yellow only on yellow.  But, moving on.

While this one just goes straight up and back down without the whirly twirls the whirlwind rocket does, it’s still our favorite because (we think) it goes higher (even though they both are supposed to go 150 feet).  AND since it doesn’t have those plastic wings on it (that hurt if they hit you) it makes for a great game of “I got it!  I got it!”   In which no one ever gets it because it comes down so fast it goes right through your hands even if you manage to get under it.

Here’s a video of one of our launches:

Got a kid with a summer birthday?  These air rockets are also a great party activity with a selection of party packs!

A big thanks to Estes rockets for letting us try these out and have loads of fun!  You can purchase them online at any of the links provide above or check them out at Hobby Lobby!  You can find a selection of the regular model rockets, engines and parts on Amazon too.