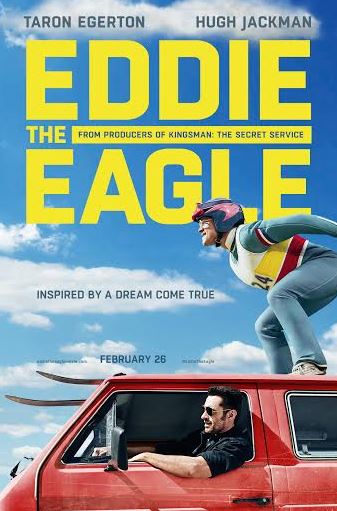 20th Century Fox is gearing up to release its new film EDDIE THE EAGLE nationwide on Friday, February 26.  Inspired by true events, Eddie the Eagle is a feel-good story about Michael “Eddie” Edwards, an unlikely but courageous British ski-jumper who never stopped believing in himself – even as an entire nation was counting him out.  With the help of a rebellious and charismatic coach (played by Hugh Jackman), Eddie takes on the establishment and wins the hearts of sports fans around the world by making an improbable and historic showing at the 1988 Calgary Winter Olympics.

Eddie the Eagle is produced by the team behind Kingsman: The Secret Service and stars Taron Egerton as Eddie, the loveable underdog with a never say die attitude.

In advance of the theatrical release, Carmike Theaters at the Summit (Birmingham, AL) is hosting a FREE advance screening on Wednesday, February 17 at 7:00PM.

There are FORTY “Admit Two” General Passes available.  You can GET YOUR FREE PASSES HERE.  Remember you just need ONE pass for TWO people.  Passes are first come, first served – once all forty have been downloaded they are gone!  Passes are ONLY for Carmike Theaters at the Summit in Birmingham on 2/17/16 at 7:00pm.  Seating is also first come, first served. Check out the trailer for the movie:

I will be unable to attend the screening because of a previous commitment but if you are planning on attending please let me know!  I would love to hear about it!

If you’re talking about it on social media use hashtag: #EddieTheEagle Tell your friends!