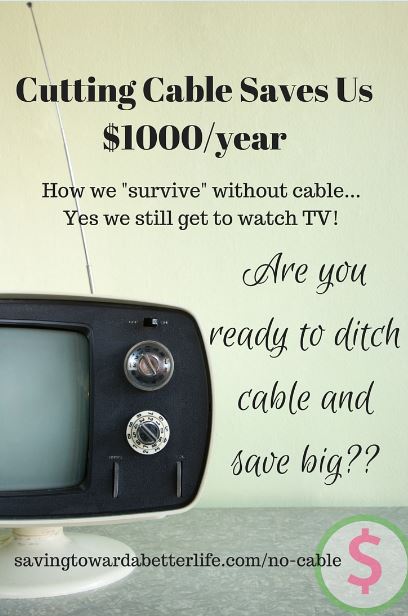 We cut our cable in December 2010 and haven’t looked back!  At $80/month, do you know how much we’ve saved per year?  $960!  Multiply that by 5 years and that’s $4800!  Now that was 5 years ago and I feel reasonably sure that if we still had cable it would be more then $80/month.  That’s part of the reason why we decided to get rid of it because we only had a bare bones package and it kept going up a few dollars here and there every few months.  So I feel confident in saying that if we still had cable it would be costing us at least $1000/year if not more.

(For the record, our Disney Cruise + travel expenses in January 2014 cost $2500.  Our cable savings paid for our Disney Cruise! What kind of vacation could YOU take if you cut cable and put the money in savings???)

We don’t miss cable at all.  In fact, if I think about it too much, I get MAD at myself for wasting all that money all those years we DID have it!!  And truthfully, there are A LOT more options for TV viewing now than when we originally cut cable 5 years ago.

Side note: I love that Bug can watch TV without being bombarded with commercials for the hottest new toy or gadget or “must-have”.  He hasn’t been exposed to the “consumerism” that makes 6 year olds put iPads and iPods in their letters to Santa and makes last years Nintendo DS he got for Christmas no longer worthy and in need of replacement by the newest 3DS or whatever.   When it comes to asking for presents for birthdays or Christmas, Bug has a hard time making a list!  This past year he wrote his letter to Santa asking for 3 things (our limit on Santa gifts) and after that, didn’t know what else to ask for from us and grandparents!  I’m just glad that we have a “filter” on what comes in to our home by eliminating cable from our lives.  That’s one of the upsides to not having cable.  (Besides the savings!)

Here’s how you can still watch TV without having cable:

If you get Hulu and Netflix you’re looking at spending about $20/month so you’ll need to factor that in your overall savings (if cable is currently $100/month for you, you’re savings is $80!)  After you ditch your cable service take 1-2 months worth of your cable savings and spend it on one of the devices.

So what about those things you need TV for, like news or weather reports?

News – is readily available online. I can even still watch my favorite news show, The O’Reilly Factor on the Fox News site. I follow Fox News on Facebook so I get news updates. Plus, I listen to a lot of talk radio. I get the Sunday and Wednesday newspapers as well as a free local paper on Thursday so I know what’s going on locally also.
Weather – Every smartphone now comes with a weather app – with hourly updates.  I also follow our local weatherman on Facebook.  He posts updates – especially on anything important coming through (storm systems, bitter cold, etc.)  You can also look up your local weather online.
So just because we don’t have cable – we haven’t completely cut ourselves off from civilization. It is possible to live without TV. And even with all the other ways to watch TV, now that we don’t have satellite service we watch a lot less TV. It’s not on just for background noise anymore which is peaceful and I don’t get sucked in to watching a Saturday afternoon marathon of a bad reality series when I should be doing something else.
I’d love to hear from you!  Have you taken the plunge and cut cable or satellite?