Let me start out by saying my little guy is as rough and tumble as little boys come.  Trucks, trains, dirt, we’re all about it.  Soccer, karate, and jumping off things like we’re Superman – check.  Pirates, Captain America, and Batman are the costumes of choice for a normal day around here.

But there is something else this boy loves. 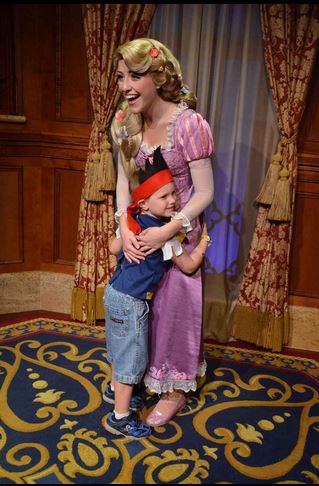 Rapunzel.   I mean, look at that face.  His day was MADE right there.  (We stood in the Rapunzel line TWICE at Magic Kingdom – Mickey himself didn’t even get that honor.  And after 10 minutes in the Goofy line he gave up and said he’d rather go do something else.  But Rapunzel we waited forty-five minutes for….TWICE.)

So it really didn’t surprise me when he asked for this for Christmas:

I really don’t have a problem with it.  I mean, it’s LEGO after all.  And he loves Legos.  It’s a tower that happens to have a purple roof.  So what?  It comes with a Rapunzel and Flynn mini-fig (thank goodness!  I’m so tired of yellow faced, generic mini-figs!)  and several other fun accessories (the back of the tower is open so you can actually play inside the tower).

So no, I don’t have a problem with getting it for him for Christmas.  What I do have a problem with is that in the store (at least the one I was at) it was NOT on the LEGO aisle.  This, and other Disney princess LEGO sets and the LEGO Friends sets are on the princess aisle of the toy store.  You know, the aisle that glows pink and sparkles because of all the pink dolls, princess dresses and Barbie doll boxes on the aisle.

I mean, don’t get me wrong.  I am GLAD Lego is trying to appeal to girls.  I played with Legos when I was a kid.  But do we still have to segregate the LEGOs?

I mean, why can’t the girls pick out Cinderella’s LEGO Castle on the shelf right next to the LEGO Fire Station?   Does it bother anyone else that we’re segregating the Legos?

We were at the store Sunday and Bug wanted to show Hubs the LEGO Rapunzel Tower.  (Hubs did not know he had asked for this yet).  He had a look of sheer terror on his face as Bug was leading him down the PINK aisle – a look that said, “Please, God, don’t let my son be picking out a princess dress.”

I mean, while it was funny to watch his face for the 3.5 seconds it took Bug to get the LEGO part of the pink aisle, it shouldn’t be like that, should it?

And again, I don’t have problem buying it for him but Hubs said, “Do you see what part of the store it’s in?”

What do you think?  Would you buy your son a Disney princess or  LEGO Friends set if he asked for one?