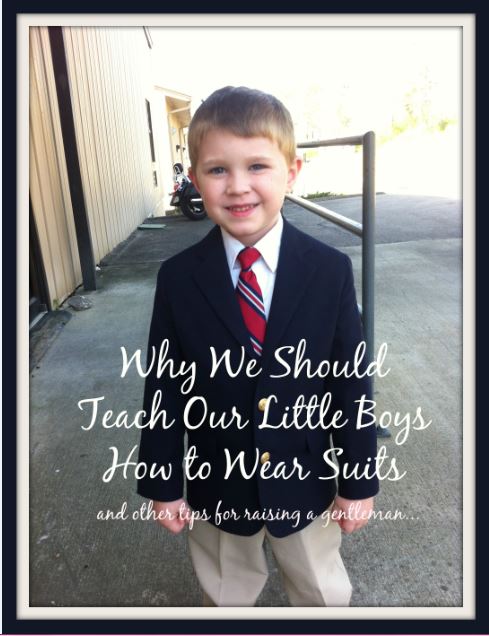 Why We Should Teach Our Little Boys How to Wear Suits

and other tips for raising a gentleman…

There are few things cuter than a little boy in a suit.  Except maybe a little boy that likes being in a suit.  I’m very blessed that it doesn’t take any negotiating to get Bug in a suit.  In fact, sometimes it’s hard to keep him out of a suit.  I think the reason why he likes it has a lot to do with the fact that he’s been wearing them since he was a toddler.

I very specifically picked the word HOW.  Why We Should Teach Our Little Boys HOW to Wear Suits.

Wearing a suit is more than just forcing our boys in one for Easter Sunday morning pictures or going to a funeral.

I think it’s a lost art.  Wearing suits.  I think society has come a LONG way in the last century.  But not all of it has been progress.  People used to dress up for the things that were important to them.  Church, parties, work, holidays, errands, visiting friends or entertaining guests.  Now, church has become a jeans and t-shirt place (which is another post for another time) and people wear pajamas to the supermarket!

I think we need to teach the next generation better – and I’m specifically talking about boys here because, well, I have one.  One day if I’m blessed with a little girl, then I’ll write about raising a lady.  :)

Why we should teach our little boys HOW to wear suits:

1 – A suit shows you take pride in your appearance – and it’s never to early to learn that.

That’s not to say you can’t look nice in other clothes.  But the suit (or shirt and tie) shows you took the extra mile.  And isn’t that how we get ahead in the world?  By going the extra mile?

And people comment on a young man in a suit.  Which builds his confidence.  It says, “people take notice when I am at my best.”

3 – Knowing how to wear a suit shows responsibility.

Bug gets to put together his Sunday outfits.  Pants, shirt, pick a matching tie, decide hat/no hat, vest/no vest, etc.  Right now all his ties are clip-ons.  But one day he’ll learn to tie a real tie on his own too.  ;)

I hope that his future wife will appreciate that she doesn’t have to lay out his clothes for him because left to his own devices he would wear a apricot and mint green striped tie with a blue pinstripe shirt and black slacks! 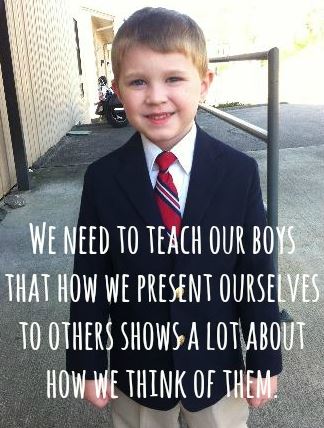 4 – A suit shows that where you are/who you are with is important.

We need to teach our boys that how we present ourselves to others tells them a lot about how we think of them.  Or that how we dress for certain places and or/events shows respect to that situation.

This is where learning how to wear a suit comes in.  There’s a phrase, “Boys will be boys.”  And there is an element of truth to that.  But I feel like many parents hide behind “Boys will be boys”.  They use it as an excuse when their child is rude, rowdy, rambunctious, disobedient, loud, mean or uncontrollable – regardless of if they are in the park or at a restaurant, or even at church.    Yes, boys can be loud, silly, active and dirty.  And there is a time and a place for that.  But we must teach our boys that there are places that demand better than that.  A suit says, “This place demands my best behavior.”

And as a young adult, wearing a suit tells a potential college, employer, date, etc that “You can expect better from me.”

Bug wears his suits to church.   I don’t put him in a suit to go to school (although there have been many mornings I’ve had to force him to not wear one to school) or to go on a playdate.  But this says to him that, “Church is important and there are expectations of me here.”  It’s an actual, physical reminder.  Not just a “hey, remember to be good” when I drop him off in his Sunday school class.

We have a talk every Sunday morning on the way to church that goes a little like this:

“When someone says you look handsome today, what do you say?”
“Thank you.”
“If someone says how are you doing today, what do you say?”
“Good.  How are you doing?”
“At church, if someone holds out their hand do we give them a high five or shake their hand?”
“Shake their hand.”
I’m not saying you have to wear a suit to learn manners.  But it’s a great reminder to use them!  (even a reminder to me to review our manners before we get where we are going.)

We just started Mother/Son dates.  He and I went to dinner at Olive Garden for our first one – a semi-nice place for a 5 year old.  We discussed lots of things about our behavior in a place like that.  A public place where other people were trying to eat and talk with their families.   He pulled my chair out for me.  I showed him how to put his napkin in his lap.  There was no sitting up on his knees during dinner.  We used inside voices, etc, etc.  If you’re not taking this kind of time with your son, you really should be!  Even if you can’t do dinner out, you can still have special dinners at home for this purpose.

Another “gentlemanly” thing that I think aren’t beyond a five year old’s capability is opening doors for others.  We practice this every morning at preschool drop off.  He opens the door and actually holds it to let me through.  There have been times he held it for others without being prompted to do.  Because he’s learned that it’s the nice thing to do.

7 – Wearing a suit now makes him comfortable in one later.

I heard a saying before, “Dress for the job you want, not the job you have.”  I want Bug to be successful one day doing what he loves.  Right now he wants to be a zookeeper and that will not require a suit, and that is fine.  If being a zookeeper is his passion then that’s what I want him to follow.  But I don’t want him to miss out on life skills that will hold him back later.  Learning now how to wear a suit makes him comfortable in one and it gives him pride and self confidence (#1) and teaches him how to present himself to others (#2).  Whether he ever realizes this or not, when he’s 22 and interviewing for an important job, he will have those skills.  They will come naturally to him because his Momma started teaching them to him when he was 3.  And even if it’s a job for a zookeeper – he’ll still need to wear his suit for the interview!  I see too many young people that put on jeans and a tshirt for a job interview…I don’t care if you’re interviewing for McDonald’s – dress for the job you want, not the one you have.  Stand out from the crowd!

What do you think?  Should we teach our little boys how and when to dress better?  What are your tips for raising a gentleman?  Leave your comments below!