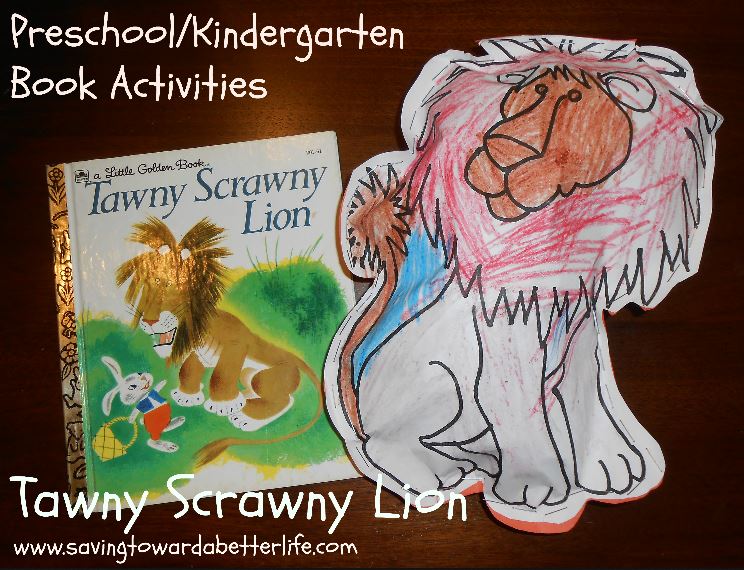 When we do our Zoo Unit in preschool I can’t help but break out my really old copy of the Tawny Scrawny Lion.  It always becomes a favorite!  And I have a craft to go along with it!

While I read it, I let the kids color this picture of a lion (that looks remarkably like the Tawny Scrawny Lion.)

I pre cut out the lion before I give it to them to color with a sheet of construction paper behind it so that the lion and the construction paper are the same shape.  You also want to leave a little edge around the lion like in the picture above.  Don’t cut it exactly on the lines.

Staple the edges from about his back heels all the way around his mane.  That should leave you just a large enough opening to stuff him.   Using newspaper stuff him until he’s “as fat as butter and as sleek as satin”.  Staple him closed when you’re done.

This is a great opposite activity too.  In the book he starts out “thin” and at the end he is “fat”.  The same with the craft – it starts out thin and you stuff it until it’s fat.

And there you have it!  A Tawny Scrawny Lion craft!

To sum up, for this craft you will need:

This is also fun to do before or after a trip to the zoo.  Don’t forget the zoo scavenger hunt list to take with you to the zoo!