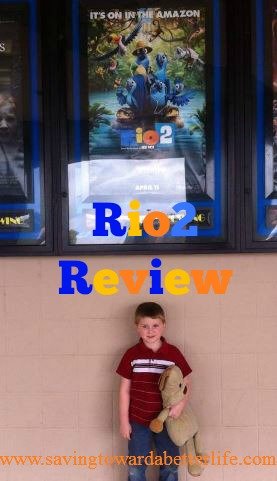 This Picky Mom’s Review of Rio 2

I am the first to admit that I am VERY picky about what my 5 year old watches. I find that most “kids” movies fall short of my approval.

When we discovered a copy of Rio at our library last year I was pleasantly surprised! It had nearly nothing that I deemed inappropriate. It was cute, humorous and the music is FUN!

It wasn’t too long after we watched Rio for the first (and second, and third and tenth) time that I found out there would be a sequel. It came out last Friday and we’ve already seen it.

I was just as happy with the sequel as I was the first one. Is the second one better (as lots of people have said)? Well, I’m not sure I would say it’s better, but they might be equal.

The second one has all the fun, humor and music of the first one. Bug loved it. All the brightly colored birds in it make it visually engaging for any age.

I would recommend this movie!

****This disclaimer is different from my normal disclaimer. I have included it, not out of obligation. But to tell you that I did not receive compensation for this review. I did not get free tickets to see this movie. I paid full price just like everyone else to see a movie we wanted to see. And I wanted to tell you what I thought about it. With no obligation to an PR company to do so.**** 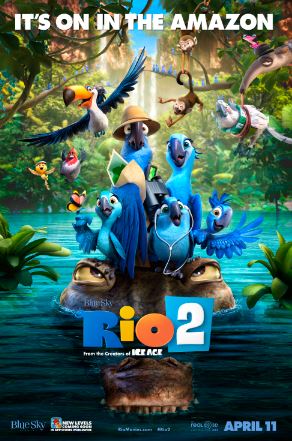 Grab your kids and prepare yourself for a wild ride, because our favorite characters from RIO are back and they’re crazier than ever! Check out the brand new TRAILER for 20th Century Fox’s upcoming animated comedy RIO 2—opening in theaters everywhere on April 11, 2014!

If you loved the first film, you and your family will surely get a kick out of watching Blu, Jewel and their three kids navigate the wilds of the Amazon as they encounter a whole new slew of quirky characters. As Blu tries to fit in, he goes beak-to-beak with the vengeful Nigel, and meets the most fearsome adversary of all – his father-in-law.