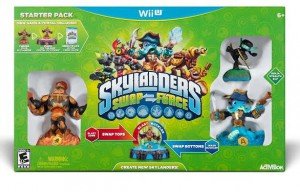 Wondering what’s hot for Christmas?  Well, Skylanders Swap Force is top on that list!  We received the Skylanders Swap Force Starter set for our Wii.  I wasn’t real sure how Bug would take to it and I wasn’t real sure it would pass my scrutiny.  I’m VERY picky when it comes to TV and Video Games for Bug.  The game is rated “E 10+” so I was concerned what might be in it to get it that rating.  Turns out, all my concerns were for naught.  It’s rated “E 10+” for cartoon/fantasy violence (nothing extreme) and complexity of the game.

Next issue was, would Bug like it?  He’s just 5 and doesn’t take interest in a lot of video games (which is a good thing, really).  But Skylanders Swap Force is not your average video game.  And when the starter set got here with this little guy in it:

..I knew we were golden.  See, that’s Wash Buckler and he’s a character in the game and he’s a pirate.  That’s all Bug needs to get his attention.

Now, you may be asking yourself (like I was) Why do you need action figures to play a video game?  Well, I’ll let the makers of Skylanders explain that to you.

Skylanders is “mixing it up” with the newest game in the award winning, top selling franchise. Skylanders SWAP Force builds upon the success of the franchise’s signature gameplay and collectible toy experience, adding an all new dimension to the “toys to life” innovation. The game introduces a compelling play pattern dynamic swapability that lets gamers transform 16 SWAP Force interaction figures into more than 250 unique characters by swapping the top and bottom halves of the toys. Now, Portal Masters can mix and match characters’ powers and moves and experience an unprecedented level of choice never before seen in a Skylanders game. Fans also can play Skylanders SWAP Force with their entire collection of 100+ characters from Skylanders Spyro’s Adventure® and Skylanders Giants. Skylanders SWAP Force features new abilities – such as flying, climbing, digging, bouncing, or teleporting – which can be used in previously unexplored areas of Skylands centered on these play mechanics.

Additionally, the game features 16 new core characters, eight new LightCore™ characters and 16 new versions of fan favorite Skylanders from previous games. Now kids will have more than 100 characters from which to choose. The game’s high resolution graphics brings detailed characters and richer environments to life, immersing players in the game like never before. In Skylanders SWAP Force, Portal Masters embark on an all new adventure in the mysterious Cloudbreak Islands, home to a mystical volcano that erupts every hundred years to replenish the magic in Skylands. During an epic battle, a brave group of Skylanders were caught in the volcano’s eruption, which blasted them apart and sent them to earth. But, the magic of the volcano gave these heroes a remarkable new power the
ability to swap halves – turning them into a special team known as the SWAP Force. Meanwhile, Kaos is back with a new evil plan. And now, Portal Masters everywhere must reassemble the SWAP Force in their original form or in new combinations and send them back to Cloudbreak to save Skylands! 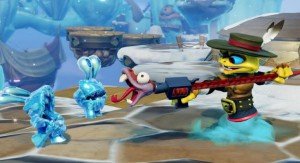 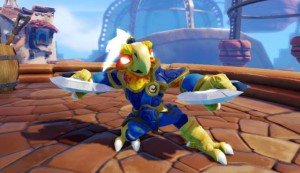 o Assortment of Gameplay Modes – Players will be able to experience various Survival and Battle Modes, all featuring vibrant, action packed arenas and environments where Portal Masters can test the true strength of their Skylanders.
• Solo Survival Mode – Single player horde style mode where players must battle through waves of enemies
• Team Survival Mode – Two player co-op horde style mode where a team must battle through waves of enemies
• Rival Mode – Two player “versus” mode where both players must fend off waves of enemies; the player with the higher score wins
• Battle Arena Mode – Player vs. player style mode that lets Portal Masters pit their Skylanders against each other
• Ring Out Mode – Players must fight to knock their opponents out of the battle arena
o Enhanced Graphics Quality – Console versions of Skylanders SWAP Force feature high resolution graphics that bring to life amazingly detailed characters and richer environments to deliver a high level of visual fidelity that immerse players in the game like never before.

The Skylanders Swap Force Starter Set will be $37 at Walmart on Black Friday or you can shop Walmart.com right now to get at this HOT PRICE!

***I received a Skylanders Swap Force Starter Set for purpose of review.  No other compensation was received.  All opinions are my own.***