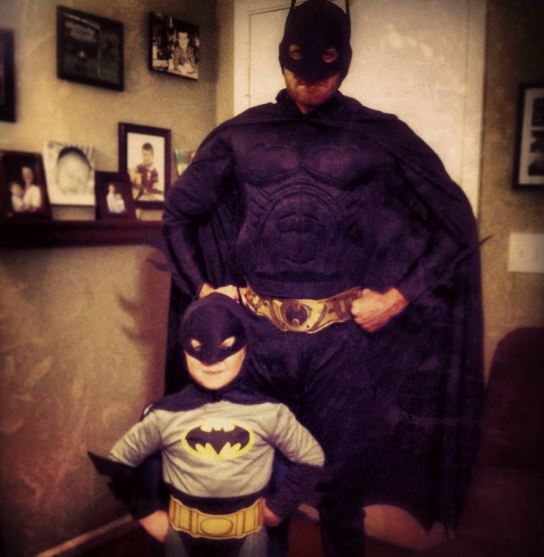 Can you tell what our Halloween theme is this year?  Na-na-na-na Na-na-na-na….. BATMAN!

Yes, Bug wanted to be Batman and Hubs is a HUGE Batman fan.  Neither wanted to consent and be a lesser character.  I suggested Robin for Bug or Joker for Hubs… but OH NO, neither one would give.  So I said, “What the heck?  Let’s all be Batman!”

Thanks to Halloween Express, we can get Batman costumes for the whole family!

costume. The most reasonably priced adult Batman costume – just $44.99.  He said he really likes it.  It’s a one piece jumpsuit with the muscle chest.  The mask and cape are one piece also and the belt is separate.    It runs pretty true to size, Hubs ordered a Medium – the size he normally wears.  He would’ve had a little more room in the Large (especially since he’s quite tall).  If there is any doubt, I would say order up a size.

Bug has the child’s Batman Costume

Don’t worry, I won’t be left out. I ordered this Batgirl Costume Kit

so I can get in on the fun too!    It comes with a shirt, a cape and a mask.  Perfect!  I can wear whatever jeans or pants I want to with it and be comfortable.  I was very worried about the sizing because nothing EVER fits me if I order online.  Their sizing chart says that Medium fits dress size 10-14 and Large fits dress size 14-16.  I wear a 10/12 in dresses but I’m rather busty so I went with a Large.  It’s perfect.  Looks good (not like it’s too big for me) but it’s not too tight that I would be uncomfortable.

I think we’re going to have a great Halloween!

Halloween Express wants to give one lucky winner the chance to have a great Halloween too with a $75 giftcard to spend on your costumes!

Want to go ahead and shop?  Save $10 off a $30 purchase at Halloween Express with coupon code ABETTERLIFE at checkout.

Enter using the form below.  Giveaway ends 10/15/13.  Gift card code will be sent to the winner by email.