Where can you fall down the rabbit hole, set sail on the Jolly Roger across the Neverland Sea, trek across the African savannah, take a magic carpet ride, get Tangled up in a love story, go under the sea and still have time to grab popcorn at intermission?

At Disney on Ice of course!!

We had the opportunity to see Disney on Ice: Treasure Trove at the Birmingham Jefferson Civic Center in Birmingham, AL.  If you’ve never been to Disney on Ice, it’s truly magical!  And, as a parent, nothing causes my heart more joy than to see my son having a magical time. 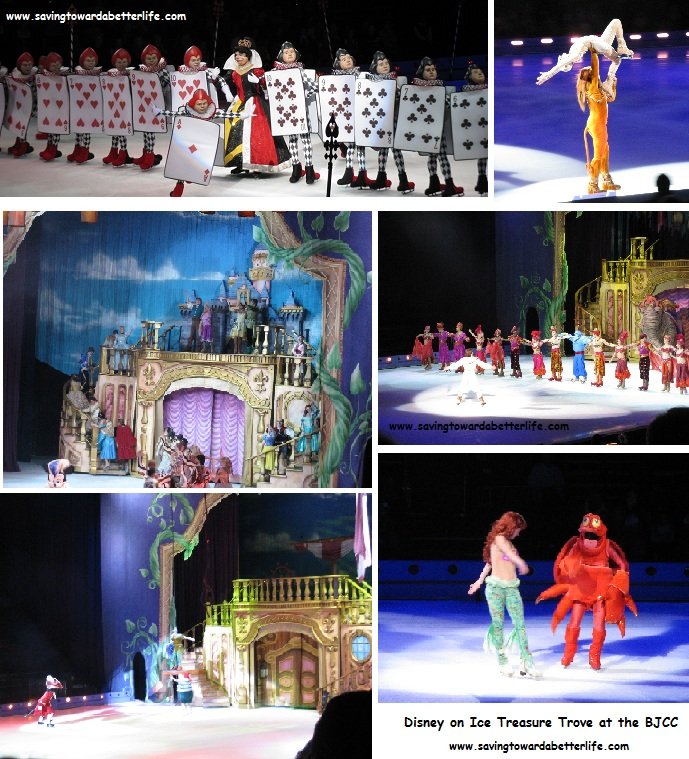 The Incredibles kick it off by getting us moving to “We’ve got the Beat” and “Pump Up the Jam.”  Then Alice went down the rabbit hole and we followed her through Wonderland.  The White Rabbit is always late, “tick tock tick tock” goes his watch.  And when you hear “tick tock tick tock” you know what that means!  That means the Tick Tock Croc is hot on the heels of Captain Hook!

Bug was on the edge of his seat when Captain Hook arrived on the scene.  His face LIT UP like a Christmas tree when the curtain drew back and the Jolly Roger, full of pirates, sailed out on the ice.  “Look, there’s Captain Hook’s CREW!” he shouted.

The whole arena (or at least our section – myself included) belted out the words to “Can You Feel the Love Tonight” as Nala and Simba glided around the ice.   And I got a little choked up at the beauty of it all.

Ariel took us under the sea, Aladdin took us on a Magic Carpet ride.  We got to see Princess Tiana, Rapunzel and the princesses that started it all…Snow White.

It was a wonderful show.  If Treasure Trove is coming near you, you should check it out!