2/10/13 UPDATE (original post is below the picture): We had a chance to make another get well card and I just happened to have some brightly colored bandages on had so we made this one with some pizazz! I love it! I almost don’t want to mail it! LOL!

What do you think? 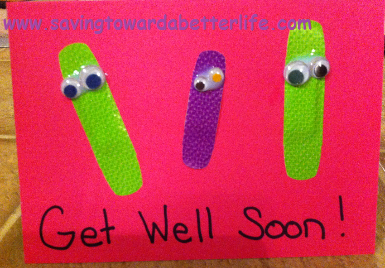 I found this Get Well Card on Pinterest and I pinned it to my Scrapbooking board for me to do.  I’ve always enjoyed making cards and I thought this was a cute one.  But then I realized, this is the perfect card for kids to make too! 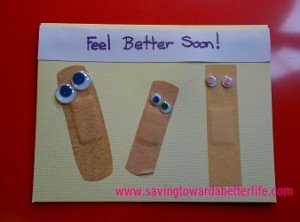 As with any craft with kids, if you want them to do it, you have to not do it for them.  So it’s not going to be perfect.  Bug did as much of this one as his three-year old self could.  The bandaids have wrinkles in them and the googly eyes are crooked, but he did it.

All you need are:

I actually had prefolded cards in my scrapbooking supplies so we used those but then I realized they had a textured surface so writing directly on them did not work.  :/  That’s why we have a strip of white cardstock at the top with our message.  I did the writing on the front and the message on the inside.  I let Bug write his name on the inside.

We sent this to Bug’s great grandmother who had surgery last month.  This is a great opportunity to teach sympathy, concern and compassion to kids.  A way to get them to think of someone else for a few minutes.  I let him pick the colors we used by asking what colors he thought his Nannie would like.  He decided that Nannie likes yellow.  Then he picked pink wiggle eyes for one of the bandaids because Nannie is a girl and in his three year old mind pink = girls… 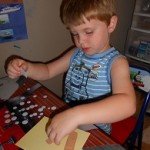