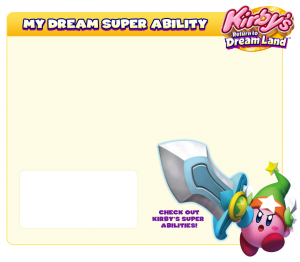 Nintendo is encouraging children across the country to come up with their own super abilities, much the way that Kirby – the main character in Kirby’s Return to Dreamland – might have.

Kids who visit http://kirby.nintendo.com/superability will be invited to create drawings and descriptions of their dream Super Abilities, taking inspiration from Kirby’s Super Abilities in the new Kirby’s Return to Dream Land game for the Wii system. Their imaginative creations can be submitted to Nintendo and may be featured as part of a project to aid Starlight Children’s Foundation.

Kids’ completed Super Ability coloring sheets can be submitted via mail, email or fax. Nintendo and Scholastic will post select submissions to a virtual gallery on the Nintendo site, and some submissions will be featured at a special Oct. 27 unveiling at Miller Children’s Hospital Long Beach in Long Beach, Calif., to celebrate Nintendo’s sponsorship of an interactive Starlight Fun Center mobile entertainment unit.

Both Nintendo and Scholastic are dedicated to raising awareness about Starlight by encouraging children to help others:

Since 1992, Nintendo and Starlight have placed more than 7,000 Fun Centers in hospitals across North America. The ease with which Fun Centers roll right up to the side of young patients’ beds or anywhere in a hospital setting makes them the perfect companion for children who are nervously awaiting surgery, sitting restlessly during a long treatment or feeling lonely in their hospital room.

The entertainment units include a flat-screen TV, a DVD player, a Wii system and a selection of fun video games.