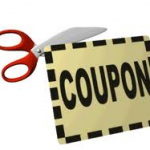 September is National Coupon Month!  Can you believe we get our own month??  :)

Here is some fun coupon history:

The first coupon ever was for a FREE bottle of Coca-Cola!

1887: John Pemberton, a pharmacist from Atlanta, creates the recipe for the syrup used to make Coca-Cola and distributes free drink cards to people on the street encouraging them to try the new drink at a specific pharmacy.

1891: Asa Candler, the druggist who bought the formula for Coca-Cola for $2,300, arranges with pharmacies to direct mail account-specific coupons to customers for a free glass at the soda fountain.

1894: Coca-Cola converts their free coupon to the format most typical today — good anywhere the product is sold. Retailers sendts the redeemed coupons to Atlanta with proof-of-purchase of the syrup for reimbursement.

The first “cents-off” coupon was for Post Grape Nuts cereal and it was only for 1c off!

By the 1930s, coupons were a staple in American households because of the Depression.