So, Saturday we were supposed to go to a birthday party. And on Friday, I foolishly told my two year old we were going to a party. I had been sick since Tuesday and was not feeling any better by the time Saturday morning came around. And it was a pool party in 90 degree heat none-the-less. I couldn’t face it – I felt too bad. But I had already told Bug about a party!

So when I put Bug down for his afternoon nap, he was talking about “going to da party”. And I told him, when you wake up, we will have a party! So while he napped, I dug out some cake mix, icing and sprinkles. And I blew up some balloons and picked out a small prize out of the stash of “prizes” I keep – these just happened to be Mickey Mouse counting flashcards – and put them in a little bag with a bow. 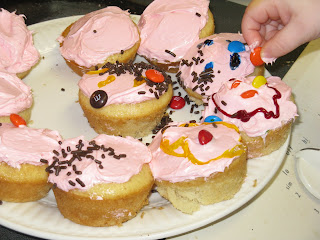 When he woke up from his nap, the first thing he saw were the balloons I put just outside his bedroom door. This made his little face light up. Then I asked him if he was ready to make cupcakes (“puptakes” he says). So I let him help me mix them up. While they were baking we played games with the balloons.

When they were done, he helped decorate them. Since this was “our party” they didn’t have to pretty, just fun! He picked pink icing and candy to put on top. We drew on some with gel icing.

And then when he got bored with decorating, we ate some! 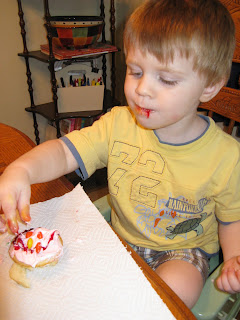 I know this seems like such a simple idea and it is. And that’s what I like about. Sometimes, we just need to “have a party”. Maybe your little one is disappointed about something, sad, frumpy, or whatever.

Taking the time to stop and “have a party” made all the difference in our day! I felt better about missing the real party. I avoided hearing “I wanna go to da party!” all night and be unable to explain to a two year old why we couldn’t. And we had some fun bonding time!

Oh, yeah and he loves his “Mickey Mouse prize”. :)

I’m sure you have everything you need for your own party right at home if you just look!