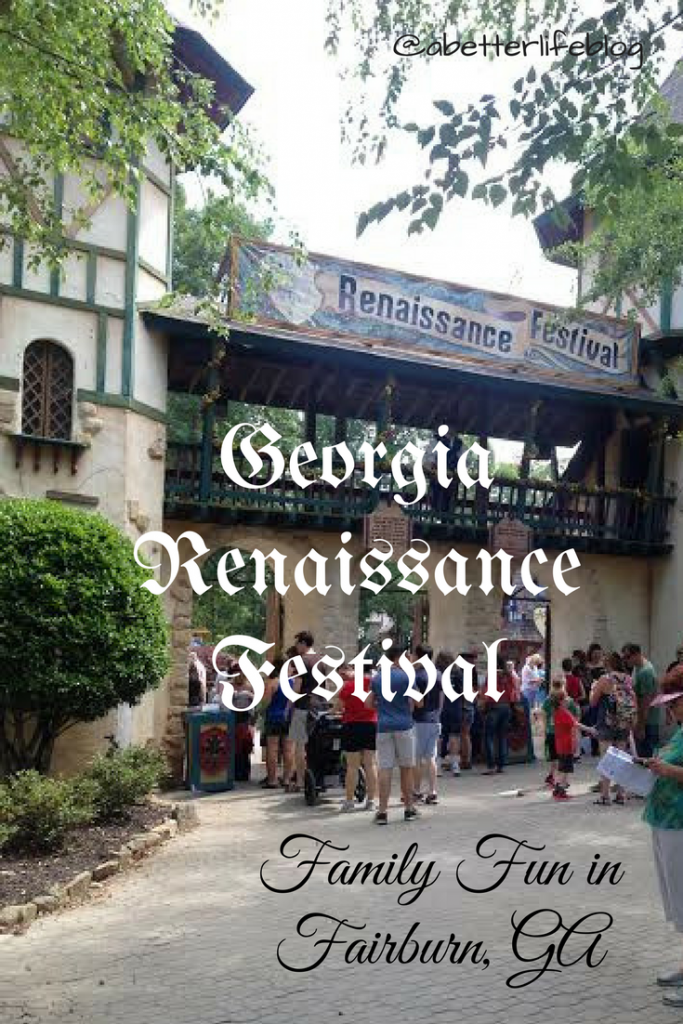 The Georgia Renaissance Festival is a 16th century England Renaissance Festival that is only open for EIGHT short weekends in the spring.   It’s located in Fairburn, Georgia, just a stone’s throw off of Interstate 20.  (We drove from Birmingham, AL,  and it wasn’t a bad drive at all.)

I had never been to a renaissance festival before attending this one.  Guys, I’m hooked.  I can’t wait to go to more.  I can’t believe I have to wait a whole year before I can go back to this one.  Serious fun was had.  Jousting, entertainment, merry-making and lots of “huzzahs!” shouted.  And tons of food on-a-stick. (More about the food on a stick in a moment). 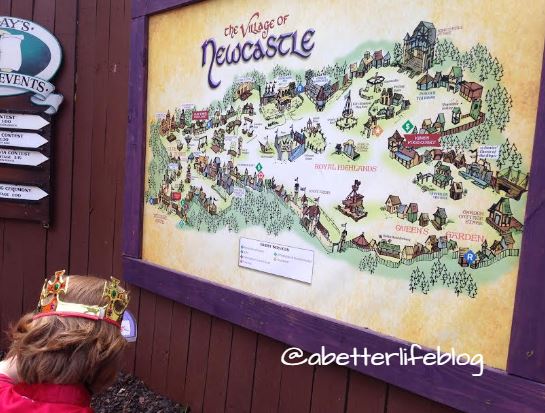 The Georgia Renaissance Festival whisks you back to 1530s England, to the village of Newcastle, a time when Henry VIII was king and Anne Boleyn still had her head.

Ok, so where to begin.  I don’t even really know.  There is SO much to tell about.   The first thing we did upon entering the festival (after checking the map), was stop and take FREE juggling lessons. 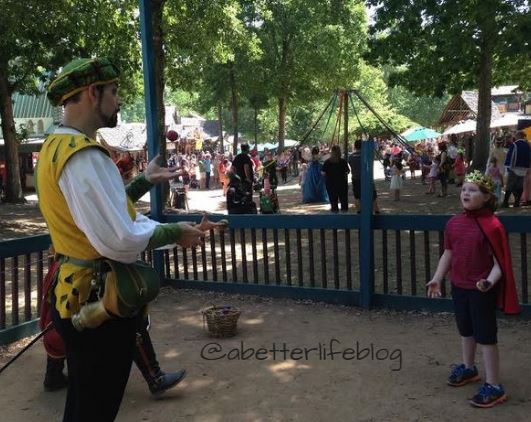 Tips for the Georgia Renaissance Festival

1.  Some of the attractions have an additional cost.  The shows are included.  The juggling lessons are free.  There is a nice playground area for the kiddos.  The petting zoo is free.  But there ARE things that cost extra.  You can see a full list here.  Prices are $2-$5 per person per attraction.  My tip for this is see everything first and then decide what you want to pay for.  I gave G $20 to spend on attractions.  But I didn’t let him just do everything he saw as we came to it or he would’ve burned through $20 before we made it to the middle of town. 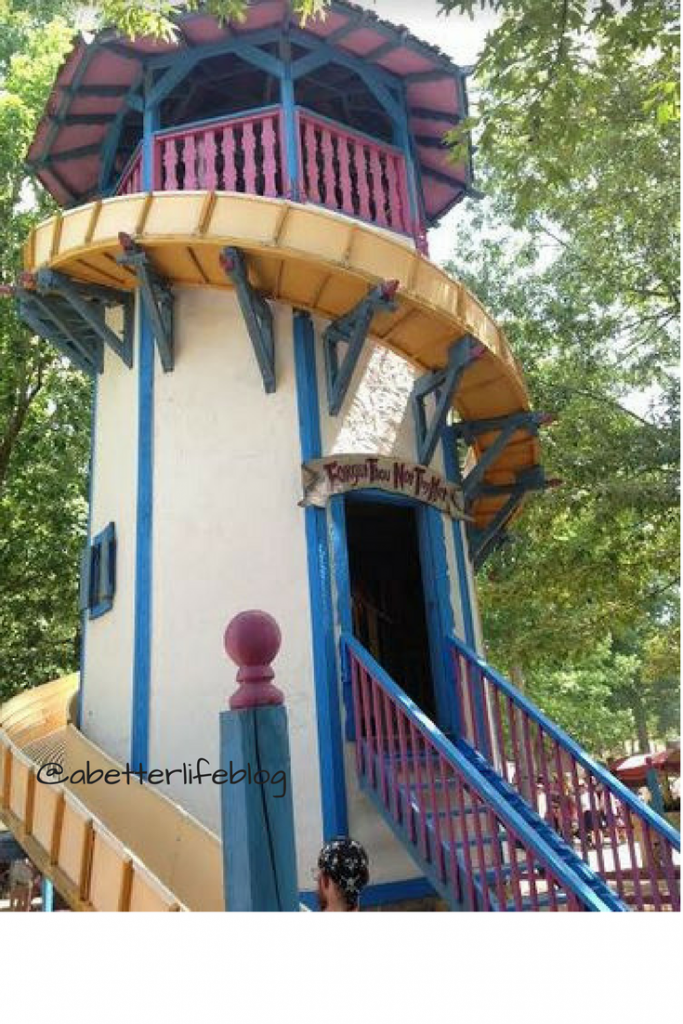 We made mental notes of things he saw he wanted to do and then waited until we had seen it all to decide.  Some of his choices were the Junior Joust, the Corkscrew Slide, Archery, Ninja Star Throw and the Amazing Maze.

The slide and the Ninja Stars were his favorite he said.  The Junior Joust he did twice.  The Archery he regrets.  It was $4 for 10 arrows – the most expensive thing he chose to do.  I tried to talk him out of it (he has a bow, arrows and an archery target in the backyard…)  All the arrows were in bad shape from overuse – they don’t fly properly when the fletchings on the end are missing or damaged.  He was very frustrated with that experience.  So, I would steer the kids away from archery.  BUT there is a vendor between the Jr. Joust and the Camelot Food Court that sells hand made bows and quivers (G bought a leather quiver from him – he’s so excited!) that has a small setup and will let kids try out a bow and arrow.  G did it twice – on our first walk through the festival and later when we came back to buy his quiver.  So if the kids are just dying to shoot a bow – I would do that! 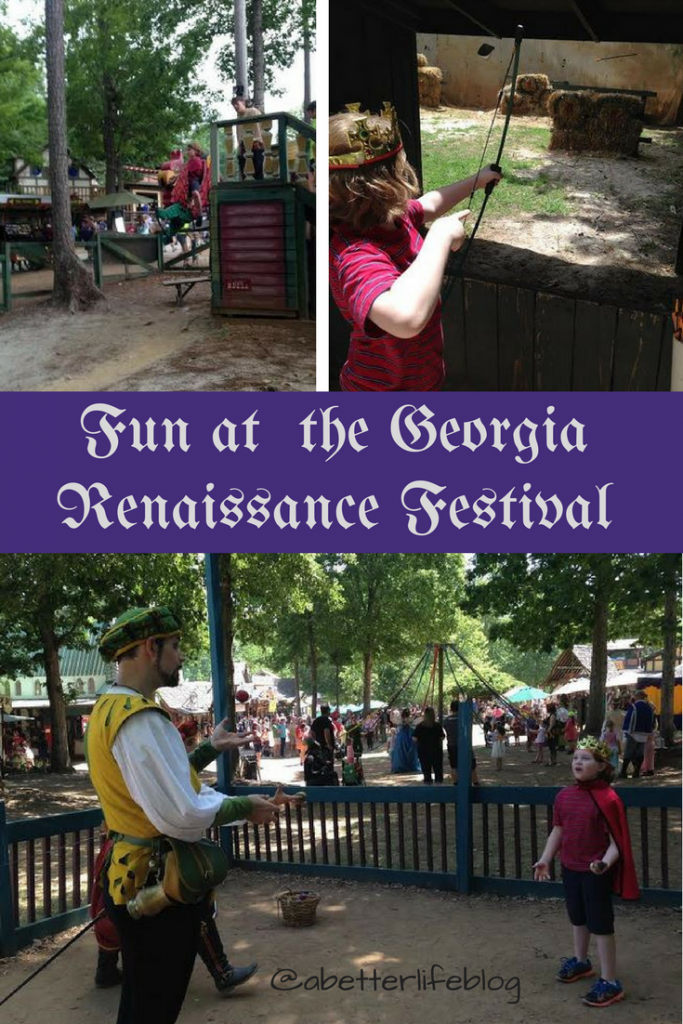 2.  Wear good shoes.  Grown ups AND kids.  This is 100% outdoors.  It is big.  Some of it is slightly uphill.  And it’s dusty.  This is not a place for you to wear your favorite white sandals or to put the kids in flip flops.

3. Prepare for the heat and sun.  It’s Georgia in late Spring/early Summer.  And it is 100% outdoors.  Did I mention that?  There are some really nice shady trees in places and some tents and such.  But for the two shows we watched, we were in the sun.  Sunscreen is a must.  And a hat and sunglasses are a good idea too.  Even for the kids.   They’re less whiny if their face and eyes are shielded from the sun during the shows.

4. Check the show times on the map.  I don’t think it’s possible to see everything.  But check the schedule so you’ll have an idea of what you do want to see.  You can also check the website before you go for descriptions of the shows.  It will help you decide what you want to see and then you can look up those shows on the schedule.  Acts can vary from year to year.  Most everything is family friendly.  If it is not, it is noted in the guide as PG or R (Ded Bob is the only show I’ve ever seen with this rating).  Also, the signs at the entrance to the shows display their rating.  Acts that appear at multiple times during the day tend to go from “G” in the morning to PG (or borderline PG13) by the last show of the day.  Just be aware.

We were only able to see two full shows.  There is just so much to do!  One of the shows was the Wheel of Death.  If you can make the Wheel of Death show, you will not be disappointed!  There is a lot of seating for this show but only some of it is in the shade.  update: the Wheel of Death was there our first visit in 2017 but we haven’t seen him since.  So acts to vary from year to year. 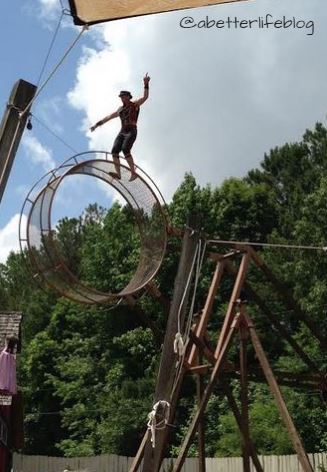 Another favorite show of ours that we’ve seen multiple times is Barely Balanced.   These guys are amazing and funny!   We went to see their Fire Finale at the end of the day on our last trip and we were NOT disappointed!  The stunts they do are crazy amazing!  But this is one show that goes from “rated G” early in the day to PG at the end of the day.  Their jokes were hilarious but some had some innuendo that fortunately went over my son’s head. 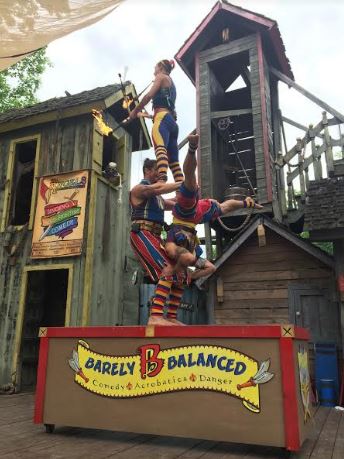 4b. Do not miss the Joust.  There are 3 jousting times – check the times!  Arrive early to get a good seat.  There’s really not a bad seat.  But little ones might like to sit close to the front.  G ended up standing in the back (the seating slopes forward) because tall people kept sitting in front of him.  But again, arrive early so you don’t miss anything.  Might be a good time to grab some lunch or a treat and head over and snack on your food-on-a-stick while you wait for the joust to begin.   The three jousts follow a storyline so they’re all different.  The first joust of the day is the best (in my opinion).  The second one is good.  The third one gets a little brutal (it’s the joust to the death!)   Again, by this time of the day, things are shifting to “rated PG”. 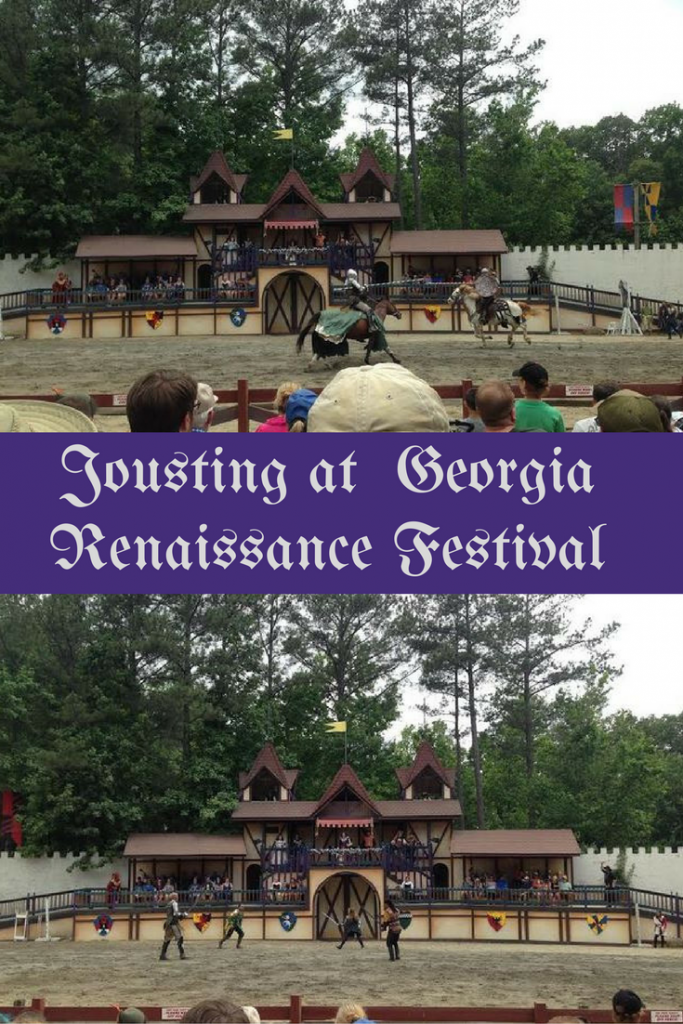 5. “Characters” are very friendly!  They will interact with you.  It’s taken G a few trips to be comfortable “playing along”.  But now he loves to dress up (he was Robin Hood when we went this year) and interact with the characters. 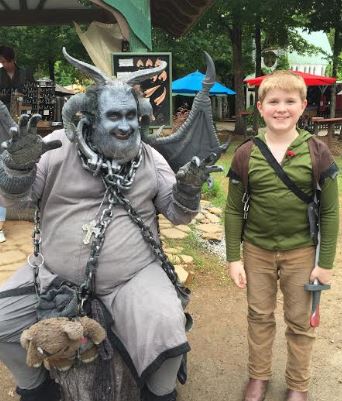 The king and queen (Henry VIII and Queen Katherine) hold court at certain times (check your times guides for place and times) and they entertain “guests”.  They are a lot of fun.  At different times on different trips, G has played games with them, had his “portrait” made, and even been “knighted” by Henry VII! 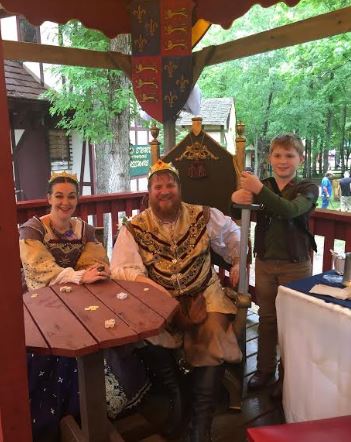 6. Plan for rain.  Plan for rain even if there isn’t rain in the forecast.  Ponchos in your bag would be the easiest thing to do.  An umbrella if your bad is big enough and you have a small enough umbrella.  You can find locations in the festival that sell ponchos for $2 (which is actually pretty affordable!)  Towels and a change of clothes in the car are a good idea too!
Of the four times we’ve been, we’ve been caught in rain twice.  It’s early summer in the deep south – the chances of after showers are good even if the weather app says there’s not going to be rain.  The good news is, it’s not likely to be all day rain – just a passing shower.  The first trip, it started raining as we were leaving.  By the time we got to the front gate, it was pouring – and we still had a ways to go to get to the car.  We were soaked.  (Hence, the need for towels in the car.)  Another trip, we ended up riding out an afternoon thunderstorm in a vendor tent.  It lasted about half an hour.  And everything was pretty soggy when it was all done (hence the need for wearing good shoes – see #2 above.)
Ironically, the fourth time we went when there was a 40-60% chance of rain all day – it didn’t rain on us a bit!  Go figure!  But we were prepared anyway – ponchos & umbrellas in our bags and towels and clothes in the car.

Ok, shoes, sunscreen, rain plan… that brings us to FOOD!

Food at the Georgia Renaissance Festival

I’m really bad at food pics guys.  I always end up eating the food before I remember to take pictures.  But here’s what you need to know about eating at the festival.

1. There are several food stands and they all have different food.  So just like the rides and games – walk around and see what there is before you start buying food.  Unless you have deep pockets and a realllly big appetite.   Most food items were $3-$5 each.  Except Steak on a Stake, it was $8, and other items like the fried green tomato BLT and wraps and sandwiches at other locations were more.  I didn’t have time to write down all the prices.  G had a pretzel, I had a meatball wrap and we shared some “fried cheese” (cheesesticks).  I really should’ve gotten some food on a stick.  But the meatball wrap line was shorter than the meatballs on a stick line and I was hungry! 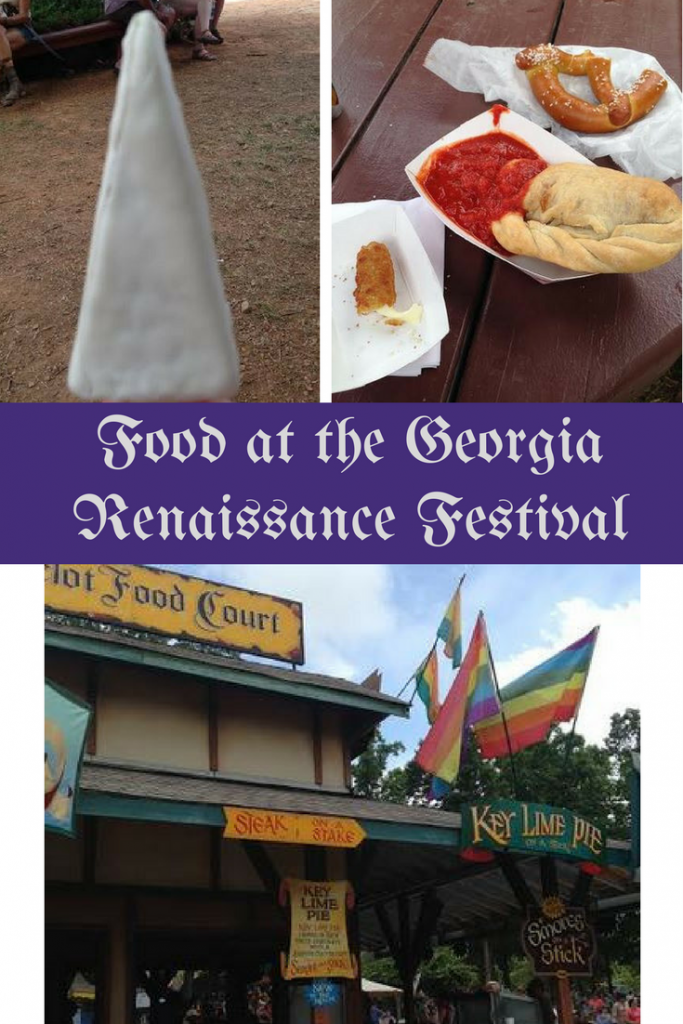 2. Everything (almost) is on a stick.   And there are no utensils.  Someone in line beside me asked – I almost laughed.  Be prepared to eat everything off a stick or with your fingers.    I love the signs.  Key Lime Pie on a stick, Smores on a stick, Meatballs on a stick, Chicken on a stick, Steak on a Stake.  Fun stuff!  I heard someone say as they were walking by the food court, “Is everything on a stick?”  YES.  Even dessert comes on a stick.

I had Key Lime Pie on a stick.   It was a slice of Key Lime Pie (crust and all) dipped in white chocolate and served like a popsicle.  It was interesting and tasty!  G got ice cream for dessert – he’s not terribly adventurous with food.

After we ate I found another food area that had some selections not on sticks.  Like a fried green tomato BLT, quesadillas, baked potatoes, wraps and lots of fried stuff – fried oreos, fried twinkies.

update after our 2018 visit: I HIGHLY recommend the Fried Green Tomato BLT.  It is delicious!  I’m looking forward to it when we go back in 2019!

Above all, HAVE FUN.

The atmosphere is great.  The festival characters (I’m sure there is a more appropriate name for them…I need to learn what it is) are great.  They are incredible actors, they are funny and they love to interact.  G wore a cape and crown so they really interacted with him.  Lots of bowing and ” good day, your majesty”.  It was great fun.

Okay, I think I covered everything.

A big thanks to the Georgia Renaissance Festival for providing us with tickets to the festival so we could try out all the fun for ourselves!