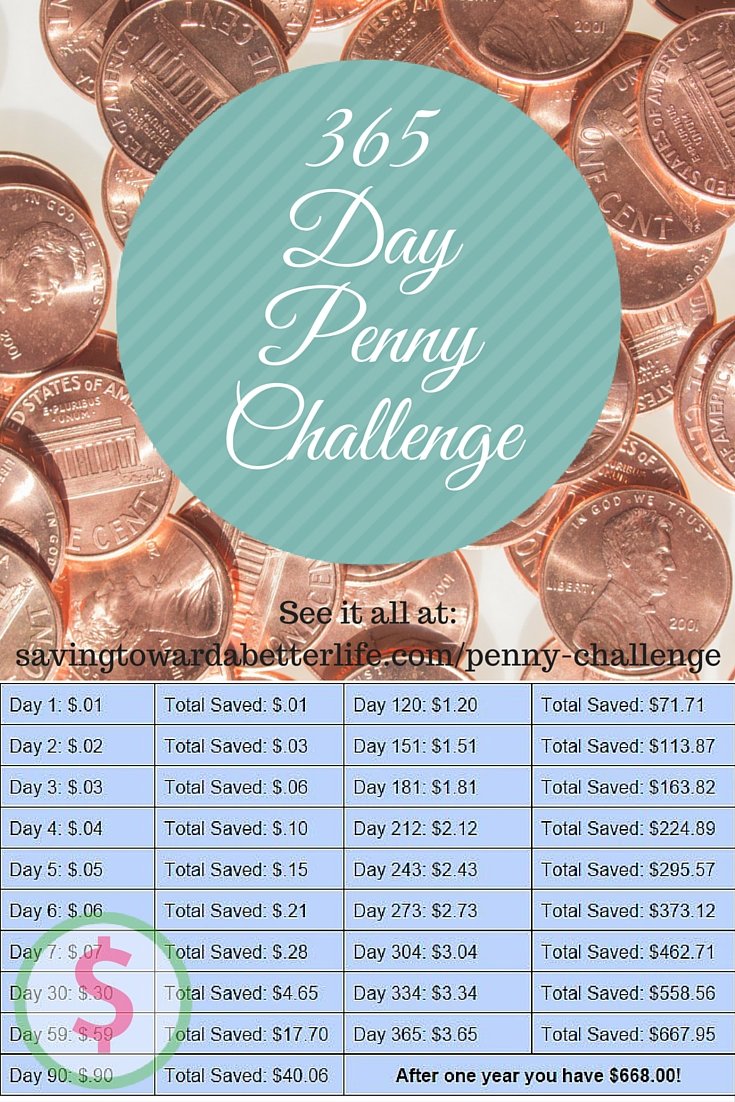 This time of the year, every where you turn, there is a “challenge” of some sort.  Which is fine, because challenging yourself is a good thing.  When it comes to challenging yourself financially it can be tough.  I’ve posted in the past about the 52 week money challenge but the complaints I hear about it are that it’s too hard to save $50, $51 and $52 in three consecutive weeks at the end of the year.  And I get that.  That’s a big chunk of change to put back – especially around Christmas.  You can do it in reverse, starting with the highest amounts at the beginning of the year, but that still means finding $200 extra in one month to put in savings.  There are months when I don’t have an extra $200.

This year I proposed this plan which gives you an amount equivalent to the 52 week plan but you put back the same amount – $27 – every week. That’s $108/month.  For some of us, that’s more doable.


Here’s how it breaks down: 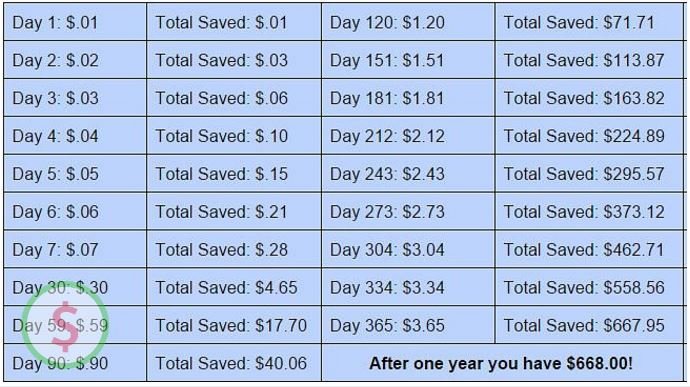 If you start at the beginning of the year Day 30 would be January 30th.  Day 59 is the end of February, Day 90 is the end of March, Day 120 is the end of April, etc, etc (see how I did that?)   Even though it’s a few days into January, it wouldn’t be too hard to catch up.  You could probably find enough change in the dryer or in your couch cushions to catch you up.  I realize that by the end you’re saving a little more than pennies, I’m okay with putting quarters in the jar – you don’t have to find 365 pennies in one day to put in the jar.  I guess I could’ve called it the 365 Day Spare Change Challenge.  I don’t know, does it have the same ring to it?

The most you’ll put away in any one week is $25.34.  And that’s the very last week.  So if the 52 Week Money Saving Challenge doesn’t work for you because of the high amounts at the end of the year and the $27/week of the modified 52 week plan is to much you might want to try the penny challenge!

If you’re afraid that $25.34 is too much the last week of the year, you can always do the last week at any other point in the challenge when you DO have the extra $25.  You could even do the whole month of December ($109.39) when you have it – like say, after your tax refund?  Yearly work bonus?  And then just pick up where you left off and finish it out.

It’s a lot to keep track of – but you can always use a glass jar (like an old spaghetti sauce jar) and use a Sharpie to mark the days in tally marks as you add the money.

2016 is actually a leap year and I didn’t factor that into the chart.  So day 60 will actually be the end of February and every other “ending day” on the chart will be off by one.  On the last day of the year you’ll put back $3.66 – for a final savings total of $671.61!  I don’t know about you, but for us, an extra $600 is MORE than enough to pay for Christmas.  In fact, it could probably pay for Christmas TWICE.

So let me hear from you in the comments – is this a better challenge than the 52 week challenge?  Are you up for it?