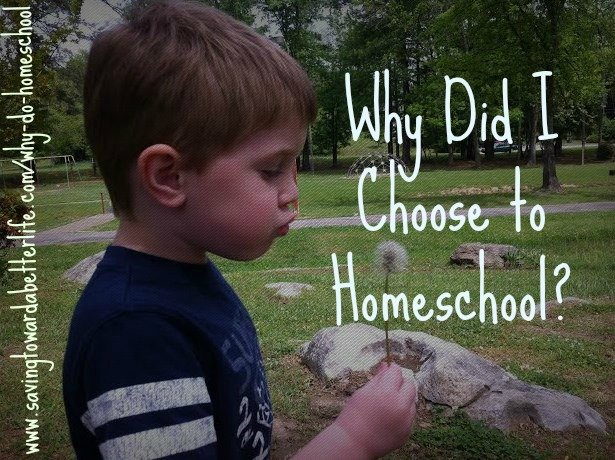 I had a post on my reasons for choosing homeschool.  I spent hours last summer working on it.  I pinned it on Pinterest.  I linked to from my main page.  People commented on it, shared it.

I tried in vain to recover it but I wrote it months ago and really have no idea WHEN it actually went missing.  So I decided to rewrite the article.  But I couldn’t completely remember everything I wrote.  And honestly, in the 6 months we’ve been homeschooling our reasons have changed.  Or at the very least, been reorganized.

So maybe it’s good the post is gone.  Because now I have a chance to rewrite it from a new perspective.

Why Do I Homeschool?  My Reasons for Choosing Home Education

Number 1 (and these are almost in order of importance) – Common Core is scary.

Early on, naysayers of Common Core were considered nuts, paranoid, annoying, uneducated and probably some other words I can’t think of at the moment.

We were told “It’s just a set of standards.”

But I think truth is coming to light.  Please be aware of what’s going on.  From data mining our children, inappropriate sex education, “teaching to the test”, complicating math, endless hours of homework, to shorter recesses and eliminating arts and music.  I could link to hundreds or articles.  I could talk about it all day.  But none of it is good!

You’re probably thinking, “Wait…what?  Isn’t socialization one of the arguments against homeschooling?”

That is the go-to response from people who have no idea what homeschooling really is.  “But what about socialization?”   Because if your child doesn’t go to public school he’s going to be a weirdo.

Honestly, the idea that grouping a bunch of emotionally-immature same-aged children together and insisting that they’re learning appropriate social skills from each other is about as antiquated as believing that the Sun revolves around the Earth.

That is to say, it’s been proven time again to not be so.  “Mean girls”, bullies, school shooters, hazing, children committing suicide, self esteem issues, teen pregnancy, peer pressure and drug use are the results of “public school socializing”.

If you think I’m only pointing to extreme examples, fine.  Just look at the day-to-day examples.  With rigorous class and little time for recess, short lunches and rules against talking during class, in the halls and even at lunch, when do they get to “socialize”?

Instead my son is being socialized with peers, older children, adults and role models of my choosing, or at the very least my discretion.  This includes numerous church activities, our local homeschool co-op group, families with whom we share like-minded beliefs, play dates with other homeschoolers, as well as bi-weekly karate lessons and 12 weeks of soccer every spring and fall.  Our social calendar is full.  With time for more “socialization” opportunities than if he went to school for 30 hours a week with an additional 10 hours of homework.

But because of choosing to homeschool and being to evaluate his level and tailor his learning to him and him alone, in half the time (roughly 20 hours of school a week – and that’s really pushing it, it’s really more like only 15 hours of school a week) he is halfway through 1st grade.  We are by no means looking to rush through school.  But why hold him back if he’s perfectly capable of doing the work?

At 5 years old, my child panicked if someone mentioned how excited he must be that he would get to go to school soon.   I don’t know why.  Even though homeschooling had been on our minds for a while, we never spoke of school around him.  And had been in daycare as an infant and toddler,  and went to half-day preschool as a 3 and 4 year old.

But he was terrified about going to school.  And I do not subscribe to the theory of “just send him and he’ll adjust.”  Why should I if I don’t have to?

That is to say, he is active and wiggly.  He can’t sit in a chair to save his life (he stands at the kitchen table during 80% of his school work).  When he’s excited about something he can’t contain his enthusiasm.  And if he wants to “talk it out” he’ll pop if you don’t let him.

Number 6 – I wanted my child’s first educational experiences to be positive.

I know there are some really wonderful teachers out there.  But then there are ones that aren’t.  And I hear stories from parents of public school kids of the years their child gets a teacher that just doesn’t mesh with their personality or their learning style.  With so many children in one classroom and no child exactly like the others, I know it’s hard to cater to each personality.

Bug loves to learn, always has.  I wanted him to be challenged academically at his level, not anxious and have the freedom to be him.  I feared him being labeled a problem child because he can’t sit in a desk, always refrain from blurting out, or has to bounce up and down because he’s so excited to answer a question.  After all, he’s just 6.  Those skills will come with age.

For now, the most important thing is that he loves to learn.  And I didn’t want a bad first year at school experience to squash that.

Homeschooling is right for our family.

I understand that homeschooling is not right for every family.  But I have a feeling it may be right for more families than that actually do it.  Many families tend to dismiss the idea without giving it real thought because they feel they are unqualified, don’t have enough patience, or think it’s too hard.

Let me let you in on a little secret.

We all start out unqualified.  Seriously.  Homeschooling is one of those things you just have to jump in feet first and learn as you go along.  I don’t care if you have a college degree.  You are no more or no less qualified to homeschool as the mom with 2 semesters of junior college under her belt (that would be me by the way…)   It’s a learning process for everyone.

None of us have enough patience.  But we have the Grace of God.  And on those days when it feels like the patience is gone, we lean more on God to get us through…and he does.  And every day is new.  And once you learn your rhythm and what works for your family, you’ll find the patience testing times fewer and farther between.

I would love to hear your reasons for homeschooling, your thoughts or any of your comments below!