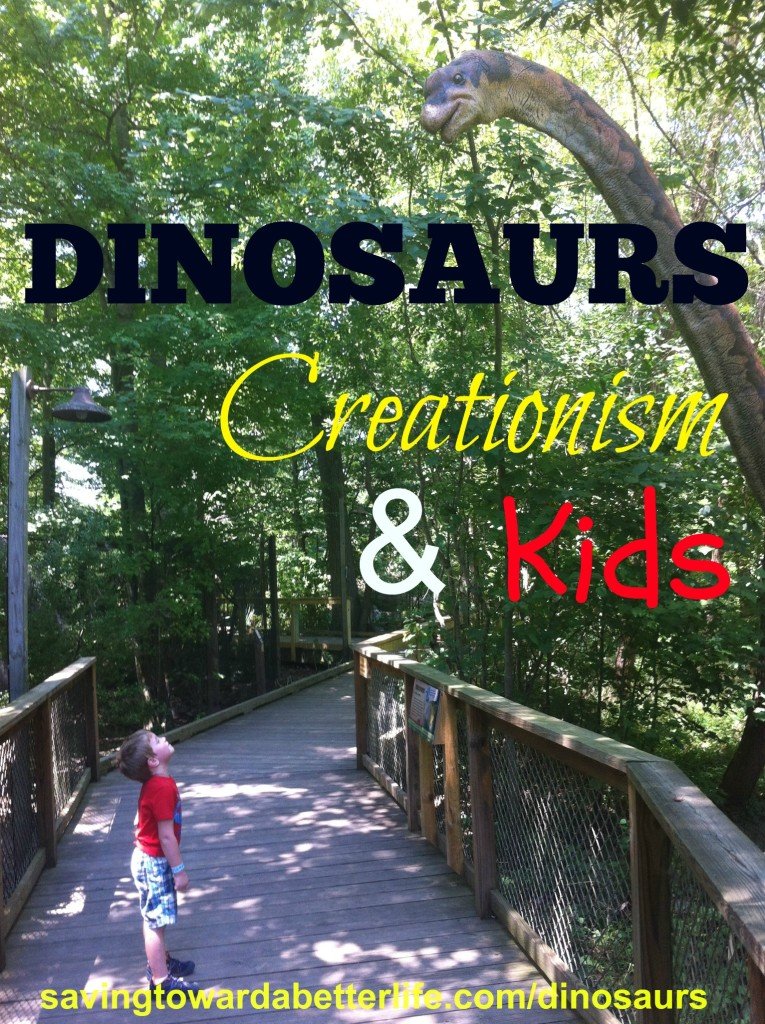 Dinosaurs, Creationism and Kids | How do we teach them the truth when no one else will?

Creationism is the belief that the Universe and living organisms originate “from specific acts of divine creation.” For young Earth creationists, this includes a literalistic reading of the Book of Genesis and the rejection of evolution.

Plain and simple, that’s what we believe.  And that doesn’t fit with anything that is taught about dinosaurs anywhere.  If you think your preschooler is safe from Satan trying to make a foothold in his life for later doubt and skepticism, you are wrong.  All you have to do is open up 99.9% of books about dinosaurs or turn on Dinosaur Train and let them start telling your child that dinosaurs lived millions of years ago.  It’s the first lie the world will try to feed your child.  And if they have any interest in dinosaurs, you have to be proactive about heading this lie off.

We’ve barely even scratched the surface of Kindergarten and we’re already tackling this head on.  Bug has taken a huge interest in dinosaurs. And when he takes an interest he doesn’t just play with dinosaur toys and stomp around the house pretending to be a dinosaur.  He wants to know everything about them.  So here we were at a precipice.  He already loved Dinosaur Train and could tell you a lot about dinosaurs from it.   So we had a frank discussion about how sometimes people just said things that were wrong.  As best as I could, I explained that there are people out there that don’t believe in God, so they don’t believe He created everything and they make up “facts” to try to prove that God didn’t create the world.  And that a lot of those facts have to do with dinosaurs.

It boils down to this, you cannot believe dinosaurs lived millions of years ago before man AND believe in Biblical creation.  Biblical creation points to a young Earth.  I’m not going to squabble about particulars, estimates vary between 6000 and 7000 years. I can’t be sure, but it is safe to say that the Earth is less than 10,000 years old.

I grew up in church.  And yet, I was never taught this.   I went to a private Christian school for the first 8 years of my schooling and we never even TOUCHED this in science class.  When I asked how the earth could be millions of years old or how dinosaurs became extinct before God made man, or how they became extinct I was met with answers like, “It’s not for us to understand”, “We just have to trust God”, or even, “It doesn’t matter.”

But it DOES matter and there ARE answers.  And you need to have the answers to those questions before your kids even ask them.

But I’m not a scientist.  How can I explain this too them?

You don’t need to be a scientist.  In fact, scientists have come up with a lot of complicated, full-of-holes theories to a very simple question.  If you believe in God and His omniscience, omnipotence, and omnipresence then this is not a complicated issue.

“In the beginning, GOD created the heavens and the earth.”

That is what you need to teach your first science lesson.  In the beginning, GOD….

Now, if we take the Bible at what it says, then these facts are easy to put our faith in.  But there IS scientific fact to back this up and we will get to that in a minute.  I’m not going to try to tell you, but I’m going to share the resources I have used.

But first, Christians need to stop making excuses for the world view of Dinosaurs and how they relate to creation.  I have heard Bible-believing people just pass the two lies above to their kids without batting an eye.  I have heard Christians try to align Genesis 1 to the worldview of creation by saying there were “thousands of years” between what is called “day 1”, “day 2”, etc in the Creation story.  We do not have to align the Bible with what agnostic/atheist/unbelieving scientists are passing off as fact.  We do NOT.   For one, it won’t work.  And secondly, evolutionary science is a lie and the Bible is the truth.  Lie and truth don’t mix.

With all that said, I’m going to share with you the books I’ve turned to for answers.

The first is Unlocking the Mysteries of Creation, The Explorer’s Guide to the Awesome Works of God, Second Edition

I have the first edition of this book. I’ve had it for 10 years at least. It wasn’t until I got this book – and I was an adult when I got it – that I finally got the answers that had been swirling around in my brain for years.  It is a wonderful book.  Lots of brightly colored illustrations.  It covers everything from creation, to dinosaurs, to the Flood, to evolution and more.  It’s very comprehensive.  I think everyone should own this book!

Bug enjoys looking at it and if he asks a question about any particular illustration I can explain it on his level but this is more a resource for you as a parent or for your older (high school aged) children who are already familiar with some of the scientific concepts discussed.

We found Dinosaurs Unleashed: The True Story About Dinosaurs and Humans

at our local library.  I was thrilled.   Bug LOVES this one.  We’ve checked it out multiple times.

This one is great for all ages.  It has cool dinosaur pictures and facts about dinosaurs minus all the “millions of years ago” and “Cretaceous time period” and “Mesozoic Era” information that clutters other dinosaur “fact” books.  It also points to proof that dinosaurs and humans were alive at the same time and provides answers to what happened to dinosaurs during the flood, how they became extinct and more.

There is another book I found at our local library, Truth Be Told

, that is written by the same author as Dinosaurs Unleashed. It had some of the same topics with a lot more indepth stuff. It’s written kind of like a text book complete with chapter review questions at the end. This might be a good resource in your homeschool science classes.

Answers in Genesis is a great site to check out too.  And I want to take Bug to The Creation Museum very soon!

I hope this has helped open your eyes to something I feel is often overlooked even by well-meaning Christians.  We think if we teach them about Jesus, salvation, repentance we’ve done our job.  But if we can’t solidify all areas of the Bible in their minds and our own minds too, then we’ve left holes for others to fill.  For some people, “just because” is not an answer.  That doesn’t mean that those people (I’m one of them) don’t have enough faith.  And it’s perfectly acceptable to back up our faith with facts.  We have the Bible, we have to information to answer the questions we have.  Sometimes we have to put aside what we’re programmed to think, clear our minds of what we’ve been misinformed about, and look at things with new eyes.

So if you made it this far through the post, I would love to hear your thoughts!