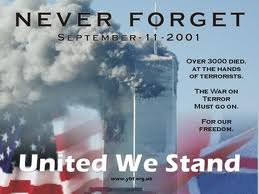 It’s the “where were you” question of my generation.  When my mom was alive, she could tell me where she was when Challenger exploded and Kennedy got shot.  When my son gets  older and starts asking questions, I’ll be able to tell him where I was when America was attacked on our own soil.

I was 17 years old, just starting my freshman year of college.  I was getting ready for my Tuesday morning Math class.  I was listening to the radio in my room.  They were laughing about something, I don’t remember what, when one of them said, “I’m reading reports of a plane hitting one of the trade center towers.”  What?  At that time, it wasn’t known that it was a commercial airline.  They were thinking small personal plane and how a pilot could “accidentally” hit the World Trade Center.  I stopped to listen for a minute then carried one with my morning routine – at that moment, the seriousness of the situation was not known. 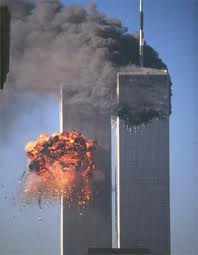 Then a few minutes later, “The second tower has been hit!”  That’s when I turn on my TV.  The images on the TV at that moment are forever burned into my memory.   I was home by myself.  Mom was already at work and dad was in St. Louis on business.  St. Louis?  I knew nothing about St. Louis.  Did it have big buildings?  Would it be a target for whoever was behind this madness?  I called Mom just to make sure she knew what was going on.  She did.  And Dad was okay.

I tore myself away from the TV to go to class.  But students were turned away upon arrival.  No one was sure what was going on or what the remainder of the day was going to hold but it was clear that classes would not be beneficial as there were many upset/worried/scared students and faculty present. 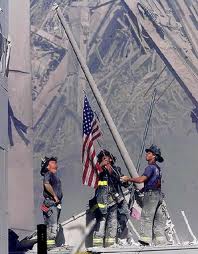