This year alone, I’ve come across two articles that state reasons why the author will never under any circumstance take their children to Disney World.   A quick google search yesterday produced four more – probably even more if I had been willing to dig a little…  But I stopped at six articles.  Want to know why?  Because they all said the same thing.

I WILL (and do) take my kid to Disney World and I’ll never be sorry that we did. 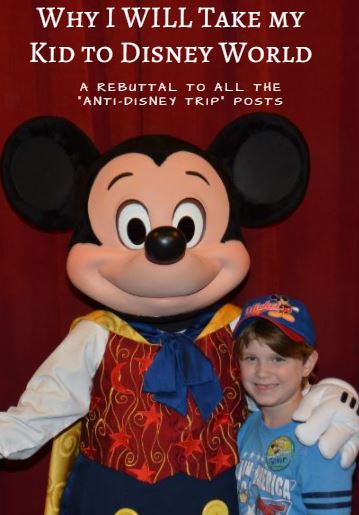 I’m not even going to dignify the six articles with a link because I’m going to tell you the points they all shared and why I disagree.  I’m not trying to make a comprehensive list of Disney world planning strategies, so I’ll try to be as brief as possible on each point.

Number one at the top of everyone’s list was exactly the same.

1. Disney World COSTS TOO MUCH MONEY

No surprise that this one tops everyone’s list.  Yes, Disney can come with a hefty price tag.  But as far as vacations go, I can’t think of many that you can customize the cost of as much as you can with a Disney vacation.  Three levels of hotel pricing, dining options for every budget, plenty of special offers during the year for ticket discounts.  Most complainers have quoted $3000-$4000 (which is about right) up to $8000 (they must have been pricing the Grand Floridian – most of us can only dream of staying there.)  But there are plenty of ways to keep the cost down.

As with anything – grocery shopping around your meal plan, buying a car, or shopping around for a new computer or appliance purchase – you have to be smart about what you pay.  A little research can go a long way in getting you the best price.

You know what else costs a lot of money?  Taking a couples getaway to Jamaica, paying for your son to play Little League travel ball, or your daughter to be in competition cheer, going to the beach every summer and the mountains every winter or a host of other things that I see people paying for right before they complain about the cost of Disney World.  Everyone has their priorities on what they’re going to spend their money on.  Just because you don’t want a budget line for Disney doesn’t mean you can write it off solely on the basis that it costs too much.

2. The kids won’t remember it.

This one popped up on multiple lists also.  I can’t even wrap my head around this one.  Yes, it depends on the age at which you take your child.  I decided I wouldn’t take G before 5 years old because my parents took me when I was four and I don’t remember much of it.  (I remember the teacups, Space Mountain and seeing Mickey).   G’s first trip (excluding a Disney Cruise when he was 5) was for his 6th birthday and we went again for his 8th birthday.  He vividly remembers BOTH trips.  And really, he remembers more of the cruise that I thought he would.  So 5 years old can be a good age too.

You know what the solution to “the kids won’t remember it” is?  Wait until they CAN remember it.  The great thing about it is that when they reach that magical age where they will remember it (5-8 years old) they are still young enough to have a magical trip.

But even if you choose to go when they are too young to remember it, guess who won’t forget?  YOU.  You will have those memories of your child experiencing the magic.

3. My kids won’t behave/are brats/whine/were terrible at the local amusement park/want every flashy toy in the gift shop

I don’t even know how to respond to this one.  The undertone in this one on every single article was, “My kid acts so bad I don’t like taking them out in public.”   No kid is perfect but with a little planning (snacks, water breaks, rest/nap time when needed) you can prevent tantrums.   Set ground rules for souvenir shopping and stick to them.  Make sure your kids know you’ll stick to them.

If you don’t know how to handle the situations in point #3, I’m afraid I don’t have enough space on my blog to help you.  The issue is deeper than a trip to Disney World.

Yes, this came up in multiple articles!  Car trips with kids were described as misery or nightmarish.  This is another one I don’t get.   I’ve never been miserable on a car trip with my kid.  In fact, he’s become quite adept at travelling.  Which is what I wanted.  I want him to be a traveler.  I want him to have wanderlust.   Disney isn’t the only place we go – he loves to travel.  He loves to “plan” trips he wants to take when he’s older.  (Greece is on his bucket list!)

If you have literally, never traveled anywhere with your kid, ever, maybe a trip to Disney doesn’t need to be your first trip.  But that’s not Disney’s fault.

Honorable mention:  The article where the author stated that she was miserable taking a vacation where she had to “room with her kids”.   I never took a vacation growing up where I slept in a different room than my parents – nor have I taken a trip like that with my own kid.  Also, if you are accustomed to taking vacations where your accommodations allow for your kids to be in a separate room, you’re spending more on that vacation than I spend on going to Disney.

5. Disney promotes consumerism/materialism/entitlement/”keeping up with the Jones'”

I’m rolling my eyes.  These issues are deeper than a trip to Disney world.  If your child feels “entitled” to a trip to Disney World, then the issues started long ago.   If your child is materialistic – that started long ago.   G knows that we will go when we can. He does not “expect” to go every year.    If you’ve raised them right, one trip is not going to suddenly turn them into entitled, materialistic brats.   And just because you go, it doesn’t mean you’re trying to keep up with the Jones’.  We go because WE enjoy it.

You don’t HAVE to buy every flashy toy in the gift shop or pay $2o for a Mickey balloon.  Teach your children to enjoy the experience and not the “stuff”.  If you cave in and buy the stuff then YOU are teaching the materialism.

“But my kid will pitch a fit for the $15 light up, spinning toy that’s just going to break on the way home.”  See point #3 – I don’t have enough space on the internet to help you if you don’t know how to handle that.

More reasons people gave for not wanting to take their kids to Disney:

The food was bad.

I hated it when my parents took me.

A ride made me nauseous.

I decided not to spend any more time on rebuttals to excuses.  I hit the ones that showed up on multiple lists. 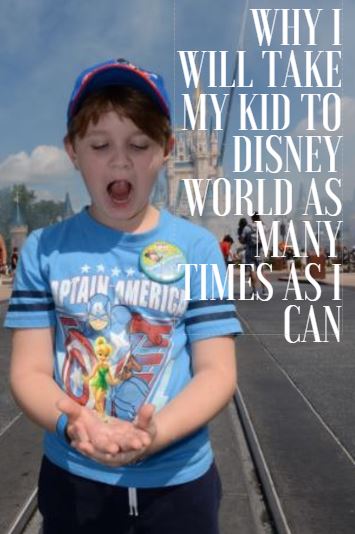 So why WILL I take my kid to Disney World?  Why will I do it as many times as I can?

I have one main reason.

I get one childhood with my kid.  And while I don’t want him feeling “entitled” to Disney World, he has so much fun when we go.  It’s literally his happy place.  Don’t we all have one?

There is no doubt an element of magic to a Disney vacation that is extra magical to watch on the face of a child.  Childhood is fleeting.  One day we will go back to Disney World and G will have fun on the roller coasters (he might even ride Mt. Everest by then!) and he’ll enjoy the shows and some of his favorite rides.  But he might only want to ride Pirates of the Caribbean once, instead of 5 times.  And he might not want to eat at Chef Mickey’s with the characters.  His eyes won’t light up when he sees Mickey.  He won’t run up to Rapunzel to give her a hug.  He won’t want to stand in line to discuss treasure and sword fighting with Captain Jack.  Peter Pan’s Flight will be “too little” for him.  He won’t want to sing “Under the Sea” with me on the Little Mermaid ride.

He won’t want to do those things because he won’t be little anymore.

Life is too short.  Go to Disney.

One day the kids will be teenager.  That’s a great time to go see the Grand Canyon or take them to New York City, or cruise to Alaska or fly to Peru and climb Machu Picchu.   But most of us aren’t going to do that with our 5, 6, 7 year olds.  Disney gives the little ones a chance to experience travel and wonder and magic in a kid friendly environment.

I don’t think most people realize this, but Disney welcomes children!   We’ve all been those places – a museum or exhibit, a restaurant or gift shop- where you could tell that children were not welcome.  Other patrons gave you the stink-eye, the store clerk hovered, you felt like everyone around you was holding their breath until you left.  You don’t have to worry about that at Disney.  (Yes, there are couple bars/restaurants inside some of the deluxe resorts that don’t allow children – but those are avoidable exceptions).  You can walk in any restaurant in the parks and there is a Disney cast member there to make your experience magical – not shame you because you brought your children in.

And Disney can be an educational experience in addition to the fun.  But that’s another post for another day!

More reasons why we go to Disney: 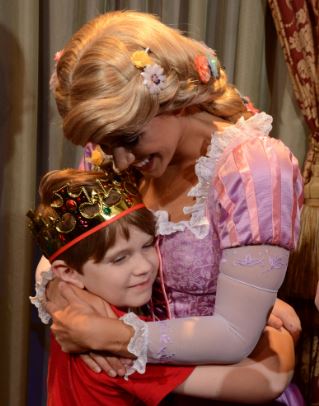 To hug our favorite princess. 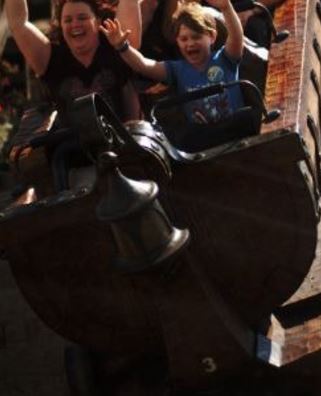 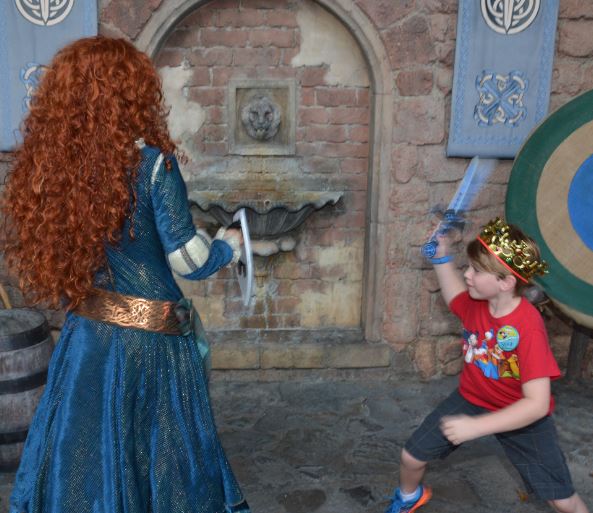 To sword fight with Merida. 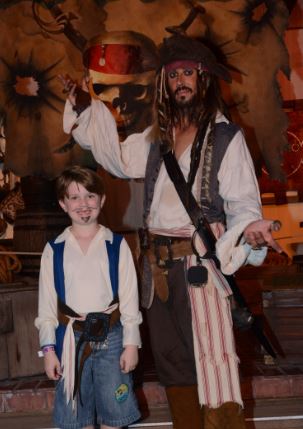 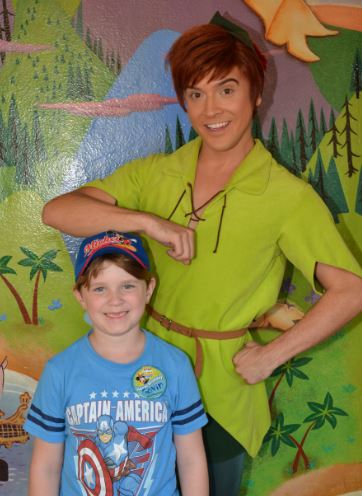 To visit Neverland and never grow up!