I got a couple emails a few days before Christmas that really made me happy! I’d been waiting almost a month to get them.  They were emails about where my Operation Christmas Child boxes went.  Thanks to the Follow Your Box online donation option, you can find out where your gifts ended up.  Last year, I did six boxes and they all went to Uganda.  This year, we packed ten boxes and this year, my boxes got split up and went TWO different places.  I don’t know how many went to each place but I do know that my boxes ended up in Madagascar and the Dominican Republic! 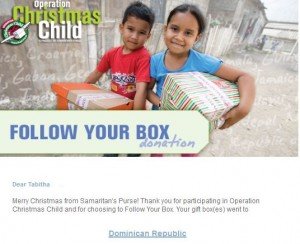 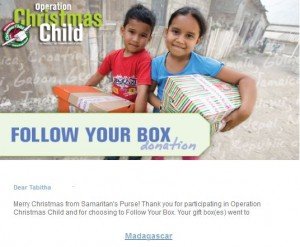 I’ve already started collecting items for my 2013 shoeboxes!  I can’t to see where my boxes go next Christmas!